all bound for Mu Mu Land... 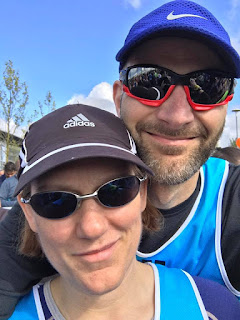 So, we ran the Milton Keynes Half Marathon on Monday.

I actually grew up around here, so it was sort of like a home fixture and we were able to stay at my mum and dad's house the night before rather than have to drive all the way down from Nottingham in one go (they weren't actually there, so we did rather use their house as somewhere to sleep, but a 10 mile journey in the morning rather than 65 miles was most welcome).  Although I do a fair bit of running, I don't actually get much of a thrill entering formal events and collecting medals, but this was a sort of start to training for the 2018 London Marathon and so I put on the MS Trust vest and blue tutu and committed to running the whole thing with my wife.

It was nice.  When you think of Milton Keynes, I'm sure you think about roundabouts... and the first five or six miles was on the wide boulevards of the city centre, taking in a few roundabouts before dipping off into one of the older parts of the city and taking us past some lovely cottages and onto paths through parkland.  It was really pretty nice.  We kept to the right as the marathon and half marathon courses diverged, but the route of the full goes out past Willen Lake and into some nice looking parks before heading back into the city to the stadium finish.  13.1 miles was plenty for me, but if you're looking for a nice spring marathon, I reckon you could do worse.  It was well-organised, reasonably well supported and, because of the stadium start, you could stay indoors and warm until just before you started running... at lots of races, even in summer, you end up doing quite a lot of standing around in the early morning getting cold. 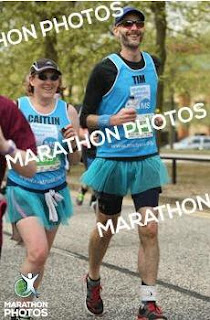 If we're going to run London together again, we're clearly going to have to get used to each other's little foibles again: I don't like to stop/start or to change my pace very much, and my wife likes to stop to eat/drink and then slows down uphill and speed up downhill.  Running together, like many other aspects of a marriage, is about compromise and understanding.

Yeah.  We've got some work to do.  Check out this video of our finish... I was slightly head as we entered the stadium and slowed down, looking over my shoulder to wait for my wife to catch up so we could finish together.  As you can see, she sprinted past me.... so she says to catch that woman running next to her.  Fairly rude, I would say.  As it happens, our chip times are exactly the same.  This is because the wise man has learned to cross the starting line a step behind his wife for pretty much exactly this reason. 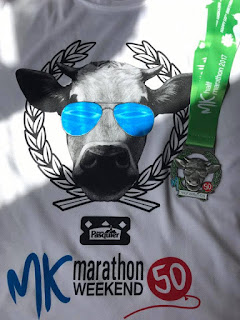 There was a pretty nice medal and t-shirt in the finisher's pack too.  The cow represents Milton Keynes' famous concrete cows, of course... but those sunglasses?  They're from a mural inside Milton Keynes Central Library that pastiches Seurat.  You see, local knowledge.

I've got a couple more half marathons in my diary for the rest of the year, together with the 24 hour relay race at Thunder Run in July.  My plan for training for the marathon next year is to try and keep my mileage up to about the 15 mile mark to the end of the year, and then to not change my training programme too much in 2018, apart from to ramp up that long run every Sunday.  Body depending, obviously.  I've run a marathon on my own now, and time really isn't the most important thing to me now.  I've been approached by the PR team of the Royal Parks half marathon, and they're going to feature me in a press release for their event, so watch this space for more exciting running and sponsorship news.

Email ThisBlogThis!Share to TwitterShare to FacebookShare to Pinterest
Labels: C, exercise as therapy, more important than that, running