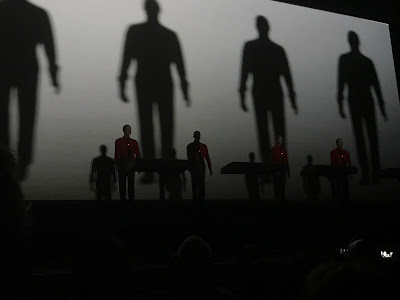 Why on earth would you want to see Kraftwerk live? Surely all they do is stand behind their computers and press play as you then lap-up an entirely pre-recorded show.  There's only one of the original band left anyway, so what's the point.   Right?

On a stiflingly hot evening, the air-conditioned luxury of the interior of the Royal Concert Hall was privileged to witness a remarkable show by a remarkable band.

It wasn't a particularly promising start, to be honest: queuing up politely outside the venue as we waited to get through a security check and to pick up our distinctly old-school 3-D glasses.  I felt as though perhaps I was here to watch Jaws 3-D ("the third dimension is terror!") rather than one of the most influential bands ever.  They threatened that they would be starting at 19:45 promptly too, but presumably were forced to delay because much of their audience had not yet made it into the venue. 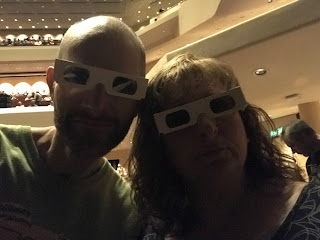 We were so close to the stage that I was also a touch worried that we might not be in the best possible position to enjoy the 3-D effects... but actually I needn't have worried and was able to enjoy both my up-close view of Ralf Hutter and the splendid effects played on the huge screen behind the band.  As you would expect, the visuals were distinctly old-school, with a touch of the ZX Spectrum about them, but they were cunningly deployed and staggeringly effective: at one point, the aerial on the front of an orbiting satellite coming straight out of the screen had loads of people around me ducking out of the way.  We were also able to enjoy the sight of a UFO buzzing past the Council House on Old Market Square before landing right outside the Concert Hall. 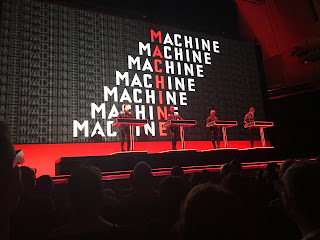 I joked before going in that we would probably have to get beered-up and then chuck lager around bellowing along to Man-Machine... and indeed, I think it's fair to say that the average age of the audience was well above 40. But, then again, the band was formed in 1969, and since when have the kids been reliable arbiters of good taste? It wasn't so very long ago that I walked past a crowd of youth queuing up outside of Rock City whilst I joined an audience of a similar vintage to watch Brian Wilson performing Pet Sounds. (Although, to be fair, ticket prices for both of those gigs is probably beyond the budget of most students, even if they would have stronger bladders that would have meant less standing up and down as people shuffled out during Kraftwerk's set for a quick pee).

One thing that strikes you immediately about watching Krafwerk live, once you've got over the 3-D effects, is quite how much they are actually playing this stuff.  I know that sounds obvious, but you can't see what they've got on their podiums as they stand their in their identical jumpsuits.  I'd imagined that it would probably just be laptops or something, but clearly each of those four guys up there has a keyboard as well, and they're clearly physically really involved in what they're playing, as they inter-weave their music together to create the most wonderful harmonies, with Hutter adding vocals over the top.  The tunes are mostly familiar, of course, not least because I've got most of the records, but because they have also been sampled many, many times over and are very distinctive cultural markers.  The band themselves are mostly impassive, but you do get some foot-tapping and Hutter himself flashes the occasional half-smile as they expertly mesh this music together. 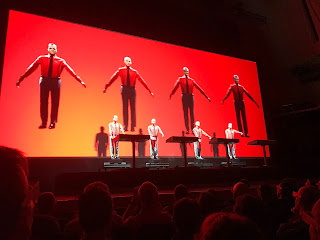 My highlights are predictable: Computer World, Computer Love, The Man-Machine, The Model, Radioactivity (actually the first Kraftwerk album I owned, picked up on an Our Price bargain bin without a cover for the grand price of £1 - it was chilling then and it's even more chilling now as Fukishimi is added to the list of nuclear disasters) and a splendid run of songs from Tour de France.  For the Encore, the band are actually replaced by robots for The Robots (do you see what they did there?) before the band return for their final blast, each taking a solo turn before departing, Hutter departign the stage with a smile and an "auf wiedersehen", leaving us to stagger back out into the clammy night to catch our breath.

An amazing gig.  The word 'legendary' is thrown around far too much, but I think it's fair to say that, when it comes to Kraftwerk, it's entirely justified.  Lots of people have tried to copy them, but no one has come close. I'm not going to Glastonbury this year, but at least I've seen one amazing gig this summer.