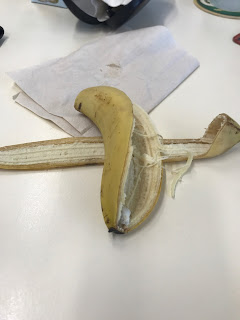 7/10, earlier
Is it strange that I sometimes just take against a piece of fruit? I bring them into work with me on a Monday morning and, almost immediately, I decide that I don’t like the look of it. I won’t throw it away until Friday evening, but from that moment, I know that I’m just never going to eat it.

I mention this because I’ve had an excellent banana week. I’ve eaten three bananas from two different bunches and they’ve all been good: peaking at an 8.5 / 10 and only dropping as low as a 7 / 10. My team were on tenterhooks this afternoon and actually asked me when I was going to eat my banana as they were keen to know the score. They were a touch disappointed that it was only a seven after the high point of Wednesday’s banana, but there’s no disgrace in a seven and that’s a perfectly acceptable piece of fruit. I actually stopped to chat to an old colleague of mine the other day and noticed that she had a rather sad looking banana sat next to her monitor. It had been there long enough for someone to write “banana” on the peel in biro.
“Are you ever going to eat that, do you think”
“No. Probably not.”
“You’ve taken against it, haven’t you?”
“Yes. Yes I have”.

Some types of fruit are reliable – it was put to me today that the apple is the McDonalds of the fruit world: safe and with very little risk. Well, that depends on the variety and the time of year. At the moment, I’m really enjoying English apples, but I find that I only really get on with them if I cut them up with a knife – a Granny Smith I’m perfectly to crunch up direct from the core. On the other hand, the pear is a low percentage fruit: at their best, they’re fantastic… but how often do you catch a pear like that? 1 in 100? The other 99 won’t get beyond a 5 and the minor disappointment of each one adds up to outweigh bothering to find a good one.

There was mild consternation in our office this week when one of the team started munching a kiwi fruit without bothering to peel it or to scoop it out: he just wolfed it down, skin and all. He didn’t understand why everyone else was so horrified and maintained that the skin contained all sorts of nutrients that would otherwise be lost… but we’re not beasts, are we? Surely, peeling a kiwi is what separates us from the animals?

Everyone else thinks of fruit in these terms, right?
Posted by swisslet at 21:27