There was a time when thought I was essentially immune to the common cold.  Well, perhaps not exactly immune, but I just never seemed to catch the infections that clobbered everybody else around me.  I might wake up one morning with a slightly scratchy throat, but it never seemed to develop into anything more substantial.

Rather smugly, I always put this down to the fact that I was reasonably fit and healthy and ate quite a lot more fruit and vegetables than average. Then I was diagnosed with multiple sclerosis and began to inject myself regularly with a drug designed to suppress my immune system.  The colds quickly followed.

It turns out that I wasn't immune to the common cold after all and that, actually, I was just being protected by a hyperactive immune system that was spoiling for a fight with almost anything.  The immune-suppressants soon put paid to that.

Worse still, when I go down with a cold now, I seem to find it almost impossible to shake.  Where most people are more or less back to normal after a week or so, I find that the symptoms drag out for months longer than that. For each of the last few years, I've had that a cold develops into something else in my lungs and, although it doubtless started out as a viral infection, I've ultimately needed an inhaler and some antibiotics to finally shake it off.

As a runner, of course, this is doubly frustrating as anything in your lungs makes running a very dubious prospect indeed. I lost six weeks of running at the back end of last year with a particularly persistent cough and every single day not running really eats away at my own personal sense of wellbeing.  I had to watch the Turkey Trot half marathon instead of running it. Imagine!

This year's cold, I'm told, is a particularly nasty strain.  Naturally, I caught it almost immediately.

Because I'm stupid and I'm stubborn, although my cold really developed over the course of the last week, I still dragged myself out on Sunday to run around the Royal Parks Half Marathon with my wife.  It was a lovely, sunny autumn morning and the course takes you through Hyde Park, St James Park, around Horse Guards and past the Palace.  It's well-supported and quite delightful.... but I predictably found it more of a struggle than either of my full marathons.  For (almost: mile 15-16 in our first marathon) the first time time running together, C found herself gently trying to pace me around the course. Not in the least bit surprising, right? 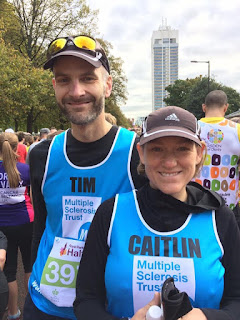 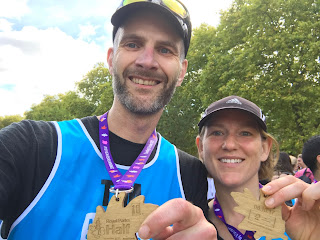 I look a bit like death in that second photo, eh?  Nice medal though.

I hate colds.  For someone with an incurable chronic illness, I have a surprisingly low tolerance for being ill.  Well, I've still got a couple of days before my next half marathon on Sunday, so.....
Posted by swisslet at 20:50

Email ThisBlogThis!Share to TwitterShare to FacebookShare to Pinterest
Labels: C, crazy in the coconut, running, WTs