a lovely bunch of coconuts... 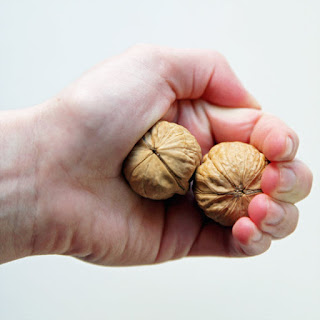 There's a lovely chap at our local parkrun: he's in his eighties now and has volunteered nearly 200 times without ever once feeling tempted to go around the course himself.  He's an absolute institution and everyone who comes along on a Saturday morning to walk, run, jog or volunteer at our parkrun loves him.  He marshalls the part of the course we call "the split", where, first time around, runners turn left and then, later on, turn right with a couple of hundred meters to the finish.  We've actually now officially named the split after him and given him some specially personalised signs so that every runner can thank him by name as they go past him.

As a member of the core parkrun team for the last couple of years, I've been lucky enough to get to know this chap quite well.  He's a cheeky sod too, and has particularly taken to teasing my wife at every possible opportunity... pointing her back around the course when she approaches the split for the second time, instead of directing her to the finish.  This week, he directed me into a space as I arrived and then held his hand out for five shillings, which he doubled when he saw my wife was also in the car.  That kind of thing.  He's a lovely guy.

Just recently, he's been particularly kind to me: he knows that I had an operation in the summer that stopped me from running for a while, and he's made a real point of coming up to me every week since and asking me -- quietly - how I am, and telling me to look after myself.  I didn't really think anything of it other than the fact that he's a gentleman.... until last weekend.

Last weekend, as he was quietly enquiring after my health, he went on:
"I had a friend who had a testicle removed, you know.  It took him a few months to get back up to speed. You look after yourself!"

I can't help but wonder exactly he's heard about exactly what I had done over the summer.

Still, his heart's in the right place.