jumble sales are organised and pamphlets have been posted... I think, of all the people I've seen and all the gigs I've attended, Billy Bragg is the artist I've seen the most often.  Starting at Bristol on the Mermaid Avenue tour in around about 1998, I've probably seen the old boy play at least twice as many times as I've seen anyone else (probably Iron Maiden, if you're interested... but just maybe Thunder, who seemed to support everyone back in the day).  I even saw him four times at one Glastonbury, each time on a different stage and with a completely different set.  It's his Leftfield sets that I remember the most fondly: initially on a Sunday night in the smaller tent just down from the Hare Krishna and then on a Friday or a Saturday night (depending on how big the Pyramid headliners were - he always tries to play against the biggest bands so that the other acts at the Leftfield don't have to).

I remember one hot Sunday night -- 2002, I think -- when Billy played with a completely blank setlist and took requests all night. It was so hot that evening that the security (in the Leftfield, these are always Union staff) passed back so much water into the crowd that every single person in the tent had at least one plastic cup and most people had two.  Good times.

I think I can honestly say that I've enjoyed every single one of all these gigs.  Some are better than others, of course. He's not a nostalgia act and regularly releases new material (he makes a point tonight of saying that he's definitely not part of the December nostalgia touring circuit and that this tour ends on 30th November).  Not all of these newer albums have been classics.  Your mileage may vary, but I would say that my heart tends to sink a little bit when he plays some of his newer, country and western tinged material.  For me, it's just not as good as his "classic" material. That said, I really enjoyed the album of train-based songs that he released with Joe Henry last year.

Tonight... well, he plays a good, 2-hour long set and plays loads of his absolute classics - some on the same guitar he recorded them on, even if "the green monster" is doing his back in.  Is it the best I've ever seen him?  No.  Is he good?  Yes, he is. Rock City is packed and you can tell that we're in the mood, right from the off, when we sing along to every word of opener "Sexuality".  Most people just do the backing vocals, apparently ("Sweden!").  Hmm.  I don't know about that, but we're definitely in good voice and keen to hear what he's got. He's playing pretty much alone, which is how it should be for Billy Bragg... backed occasionally by CJ Hillman on pedal steel and once (on "Shirley") on the Rickenbacker. "If he's Johnny Marr, then I'm afraid that must make me Craig Gannon".  Oh, I do love a nice, obscure Smiths reference.

We have some new songs too: "Saffiyah Smiles" is dedicated to Saffiyah Kahn, the lady who confronted a neanderthal on a recent EDL march in Birmingham with a smile and was captured in a brilliant photograph that shows pretty clearly where he real power lies here. 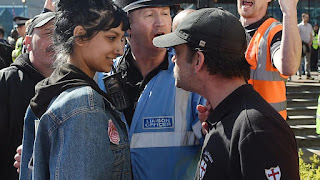 "King Tide and the Sunny Day Flood" refers to the floods that happen in Florida when the water table rises, causing surges of water even when there hasn't been a storm.  It's a fairly obvious warning about global warming.

Both of these are more successful than "Full English Brexit", an attempt to try and understand the fears of the people who voted Brexit... which means well (something that is often said about BB himself and his political interventions) but mostly just sounds patronising.

There are covers: "I Ain't Got No Home in this World Anymore" (originally by Woody Guthrie), "Why we build the wall" (originally by Anais Mitchell) - both of which I've heard him play before, as well as older BB standards, "The World Turned Upside Down" (originally by Leon Rosselson) and "Power in a Union" (Joe Hill).  Bragg's been changing lyrics around as long as I've been watching him play: he messes about with "Sexuality" and "Waiting for the Great Leap Forwards" is a joy tonight as he chops it around to make it even more relevant.  I'm not at all sure about taking on Bob Dylan's "Times They Are a'Changing" though.  Some things are better left well alone, I think.

But, you know what?  At least he's trying to keep things interesting... for himself and for his audience.  If he just came out and played "Life's a Riot", "Talking with the Taxman about Poetry" and "Brewing Up with Billy Bragg", I'd be delighted... but would I keep buying tickets to see him play?  No, I don't think I would.

Have I seen him play better? Yes, I have.  But tonight was still a pretty good way to spend a Saturday night.

To be honest, I'd come and listen to him just talking for two hours.  I don't agree with everything he says, and just occasionally he can sound like a well-worn record repeating the same well-rehearsed rants.... but it's becoming increasingly rare to hear a humane voice of reason like this in a world of spouting idiots.  Still, as he'll freely tell you himself (and has the merchandise to prove it), he's like marmite: some love him, some hate him.

Let's cherish him whilst we've still got him and he's still touring, eh? Roll on the next time.

David Belbin also reviewed this gig for the Post, and you can read the extended version of that review here. 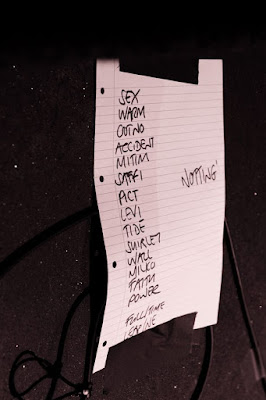 SETLIST: sexuality - the warmest room - I ain't got no home in this world anymore - accident waiting to happen - the man in the iron mask - saffiyah smiles - must I paint you a picture? - Levi Stubbs' tears - king tide and the sunny day flood - shirley (greetings to the new brunette) - why we build the wall - milkman of human kindness - I keep faith - power in a union - full english brexit - the times they are a'changin' (back) - waiting for the great leap forward - a new england
(he played 'the world turned upside down' and "st swithin's day" towards the front of the set too, neither of which appear on the setlist... )

* I was reminded of Billy by the character Korg in the recent Thor film.  Not physically, you understand (Korg is huge and made of rock), but because he's kind and softly spoken and because, as he says,  "I tried to start a revolution... but I didn't print enough pamphlets".
Posted by swisslet at 20:42