the summer of the soul in December... 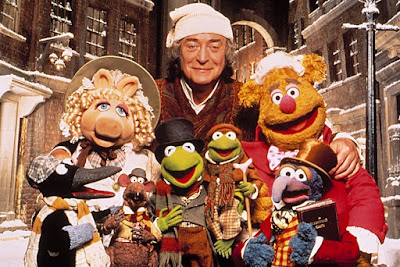 I was very excited to hear the news that The Muppet Christmas Carol would be receiving a cinematic re-release this December.  Whilst I can't honestly say that is my absolute favourite seasonal film*, it's a film that brings back some very happy memories and holds a special place in my heart.  Besides, has Michael Caine - who plays Scrooge entirely straight, with no regard to the fact that the vast majority of his co-stars are muppets - ever been better in all his long and illustrious career?

It's in the singing of a street corner choir
It's going home and getting warm by the fire
It's true, wherever you find love
It feels like Christmas

Well, as I was talking about this with my team at work, whilst Jack was very enthusiastic and wanted to look up when screenings were on in Nottingham, the girls in the team were entirely indifferent.  In fact, most of them hadn't even seen it.  "It's a boy's film", said Alice, dismissively.

As a man, perhaps it's my privilege speaking here, but I would never in a million years have The Muppet Christmas Carol down as a boy's film.  It's hardly Die Hard, is it?  We spent the next few minutes doing a sampling of all the people around our desks, and indeed..... most of the girls hadn't seen it and thought it was a boy's film, and most of the boys were fairly enthusiastic about it.

I'd be fascinated to hear what you think.

Oh, and guess what I'm giving every single member of my team as a Christmas gift.

**** Just don't talk to me about Love Actually.  In my view, that's a vile, cynical film where every single male character behaves as though they don't have an ounce of respect for any of the women.  Ugh.
Posted by swisslet at 20:00

Email ThisBlogThis!Share to TwitterShare to FacebookShare to Pinterest
Labels: compliments of the season, film, my brilliant career