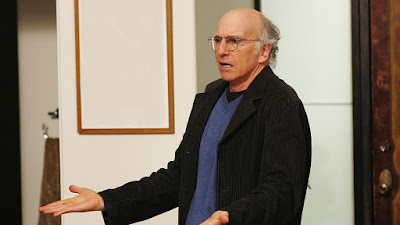 There's an episode in the most recent series of Curb Your Enthusiasm where Larry is introduced to the fiancee of his manager's daughter. This guy, we're told, has served in the US army in Afghanistan. As everyone before Larry is introduced to this guy, they each make a point of saying how nice it is to meet him and thanking him for his service. When it's Larry's turn, he just says "Hi, how are you doing?". Everyone stares at him in horror, and the ex-serviceman has to leave because he is so upset. Larry, of course, cannot and will not accept that he's done anything wrong. He's already been thanked for his service by all of you, why do I need to thank him too?

As the episode aired here in November, it was impossible not to draw the comparison with the increasing fuss people make about the poppy and making an ever-more-ostentatious show of "respect". Not wearing a poppy doesn't mean you don't care about the sacrifices others have made in time of war; not thanking someone for their service doesn't mean you aren't thankful for it, only that you don't feel the need to parrot out an automatic response... so automatic that it is stripped of any real feeling. Are you saying you're grateful because you are grateful or because that's just what you say.

I have a real bug bear about this in the office. Most of the people I work with are in their twenties. We knock along pretty well, in the main, but whenever I ask the simple question: "You okay?", I almost always get the response, "Yeah, you?"... except it comes out as "yeahyou", all one word.

I think it's a millennial thing.

What annoys me about this is not so much that they're asking me if I'm okay, but that their tone of voice and speech cadence changes slightly as they reply to indicate that they're neither really answering my question nor giving me a real answer. It's a totally automated response, and I'm none the wiser at the end as to whether they really are okay or if they're genuinely interested in knowing if I'm okay too.

Or perhaps it's just me and there's nothing at all wrong or unusual about that and maybe I'm just turning into Larry David.
Posted by swisslet at 22:01