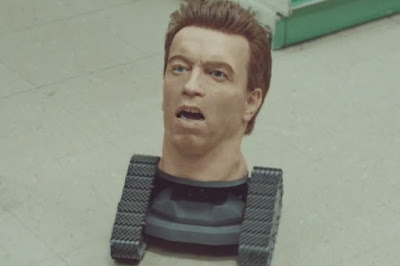 Arnold Schwarzengger’s disembodied head has just made me £615.

Although aware of PPI, it never really occurred to me that I might have a claim until I watched an advert featuring the aforementioned head on tank tracks, urging people to put in their claims as the window closes next year and the banks will be off the hook.  Apparently, the Financial Conduct Authority have seen millions of people flooding to their website and making claims since their £42m advertising campaign started.... although you might argue that £42m makes it a very expensive stable door, and that an Authority like that might be better served by actually regulating the banks effectively in the first place.  But anyway....

When I first took out a credit card, back in 1997, it came with a card payment protection insurance policy. It was annoying because I never asked for it, but it was only a couple of quid a month, and as it was my first credit card, I wasn’t really sure if it was something that I needed or not. So I left it. It seemed to be a fairly amorphous kind of insurance. Ostensibly, it was to help me out in the event that I couldn’t pay my bill, but it also seemed to offer lots of other services too. At one point, they sent me a key ring and some stickers to put on stuff, so that if they ever got lost, then they would find their way back to me. It annoyed me, but not enough to actually get around to cancelling it (which, every time I looked into it, seemed harder than it ought to have been). Apparently, it ultimately took me until 2005 to cancel the damn policy, which I think is when I binned the credit card.

I'd long since assumed that this was my own inertia that caused this and that there was no one to blame but myself, but then I saw that advert caught a couple of months ago and it was Arnold Schawarzenegger’s disembodied head shouting at me that finally got me off my (metaphorical - I remained seated throughout) arse and looking at the website of the financial ombudsman to see if I maybe had a claim.

One 16 (sixteen!) page form and a long conversation with a claims assessor from HSBC later, and the result is an offer of settlement of a little more than £615. The statement that came along with the offer showed that I had paid a total of £218.58 in premiums over the time that I had the policy (that's approximately £2.30 a month!), with the rest made up of lost interest and things like that. Given that I wasn’t 100% convinced that this was PPI in the first place or that it was significant enough, this is all something of a bonus.

I wouldn't normally be shouting "where there's a blame, there's a claim" from the rooftops... but this is the banks we're talking about, and who really feels sorry for them? That couple of quid a month really niggled me for EIGHT YEARS.  Not enough to actually do anything, but.... you know.

This definitely counts as sticking it to THE MAN, right? In the most middle-class way possible, but still sticking it to him, one PPI claim at a time....
Posted by swisslet at 20:09

Email ThisBlogThis!Share to TwitterShare to FacebookShare to Pinterest
Labels: sticking it to THE MAN