let's hope the next beats the last... 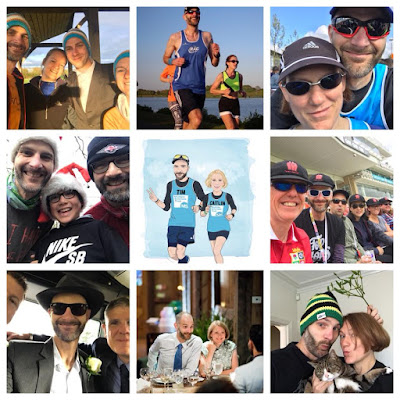 2018 is a marathon year, with the London Marathon already looming large in the diary.... less than 110 days to go already....so apparently we’re now the kind of people who prioritise a good night’s sleep and a double parkrun in the morning over celebrating the arrival of the New Year.... which is exactly what we did on New Year's Eve, shooing our dinner guests out of the door before 11pm and making sure that I was all tucked up underneath my duvet less than fifteen minutes later.

A lot of people in my office are mystified as to why anyone would want to be up early doors to run one parkrun at 9am on New Year's Day, never mind two... but genuinely it was an enormous amount of fun with lots of our friends and a lovely, fun run atmosphere.  It's probably not for everyone, but apparently it is for us. I loved it.  My younger self is horrified that I prioritised my running over my drinking, but that's his problem.

Here are 9 pictures of things that made me happy in 2017.  Thanks for being a part of it.  Running features quite heavily, just as I imagine it will in 2018, with lots of races already booked and the marathon programme underway.  My legs have been getting stiffer just recently, and I've just been prescribed a muscle relaxant to try to ease them off as I sleep. Rather than encouraging me to think about stopping running, actually this encourages me to keep going.  I might not be as fast as I would like, but I rather think that it might be very difficult to start going again if ever do stop.... it might come to that, but we're not there yet and there's a few more miles left in me yet.

Thanks for all your love and support this year.  2017 was a pretty rubbish year, all things considered and I'm not sure that any of this would be possible without the support of our friends... whether they be near or far, online or in person.

May each day of 2018 be better than the last for you and for yours.

Let's try to keep on keepin’ on for another twelve months, eh?  Why not?

Email ThisBlogThis!Share to TwitterShare to FacebookShare to Pinterest
Labels: compliments of the season, friendship, more important than that, WTs