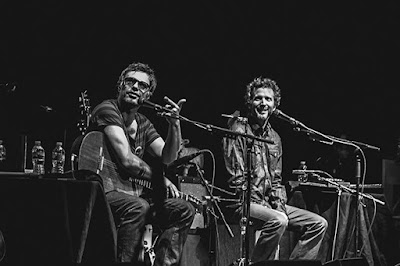 We went to New Zealand in March 2010 after a month spent travelling in Australia. In my head, I’d lazily imagined that they were probably pretty similar countries, but my preconceptions began to be changed the moment we came in to land in a rainy Christchurch that was significantly smaller than I’d imagined New Zealand’s third city would be. For the next four weeks, travelling around in a very basic camper van, I quickly fell in love with the self-deprecating Kiwis and their beautiful country. It’s in the little things: the homemade rugby posts in the back gardens of remote homesteads on South Island; the quiet excellence of their coffee (the Australians like to tell you that they have a coffee culture - not compared to the Kiwis, they don’t. The Kiwis just don’t like to shout about it); that wonderful accent (fush & chups?); the self-deprecating humour (on any subject except rugby); the fairy penguins.

I can’t remember now if I started watching Flight of the Conchords before I went to New Zealand or not (the TV show started in 2007), but I have found that exposure to Kiwis and their quirks has really enhanced my enjoyment of the show. Sure, it’s funny anyway, but visiting New Zealand and having a first-hand appreciation of Kiwis and the way they differ from their Australian cousins has sharpened my appreciation. I found that it’s much the same with a film like Hunt for the Wilderpeople, directed by Taika Waititi: it’s a lovely film in its own right, but I just felt like I got a little bit more out of it by having at least a little understanding of New Zealanders. Not least the “Stungray”.

Actually, Flight of the Conchords are that very rare beast where I think I actually prefer their music to the TV show. I like the show, but there’s just something about their two albums that has really connected with me. They don’t just write funny songs, they write songs that I’m happy to listen to and am still happy to listen to many years later. Take “Carol Brown”: on the face of it, this is a comic version of Paul Simon’s “50 Ways to Leave Your Lover”. It certainly is that, but it's also a whole lot more than that and I actually prefer it as a song too. It’s probably true to say that their humour is right up my street: they’re clever and self-deprecating and delight in word-play.

Just my sort of thing. 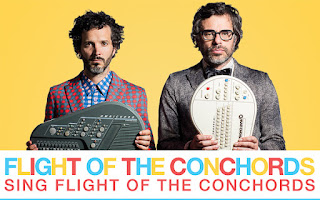 Ticketmaster’s unbelievably greedy and incompetent fuckwittery aside, when they announced a UK tour, I was always going to try and get to hold of some tickets if I possibly could (and ultimately did, directly through the Milton Keynes theatre website). It this necessitated a midweek trip down the motorway and a predictably average tea in a Slug & Lettuce, then so be it.

Support was from David O’Doherty, a brilliant musical comedian in his own right. Tonight, his own set seemed to be about 20 minutes long before he introduced the main attraction onto the stage (he was back a few times during the headline set, including a lovely performance on percussion (including some hastily sourced spoons) during the encore.

With a cheery "Good evening Milk and Beans!", our heroes enter the stage. Bret and Jermaine have both certainly aged a bit since we last saw them together in the TV show, something they’re quick to acknowledge. But haven’t we all? They’re already played a few shows on this tour, and I have no idea how much work they’ve been putting in at the rehearsal room, but I think that “slightly shambolic” is probably the best way of describing them onstage. There a plenty of fluffed lyrics and onstage asides during the show, but that’s always been their schtick and is very much a part of their charm. They take great pleasure in introducing the New Zealand Symphony Orchestra onto the stage to accompany them… Nigel, who shuffles onto the stage in a tuxedo t-shirt. It’s a funny joke, but when they don’t quite get the reaction they’re hoping for from the audience, they good-naturedly grumble about it to each other and to us. They don’t like to compare audiences, they say, but weren’t Portsmouth great the other night. Actually, mild grouchy dissatisfaction with the audience reaction is something of a recurring theme for the show. I think they’re mostly doing it for a laugh, but I can’t help but quite escape from the feeling that they do mean it a little bit, because they’re a bit sensitive about being a bit ring-rusty and, dammit, they’re proud of how clever some of this stuff is. The first half of the show is mostly stuff that’s not-exactly new, but is likely new to most of the audience and doesn’t feature in the show or on the records. “Father and Son” tells the touching story of a father and son relationship where it slowly becomes clear that mum isn’t dead and dad’s life has just come off the rails; “Deana and Ian” is the thrilling tale of an office romance between Deana from HR and Ian from accounts; “Stanus” is a long, shaggy dog story of a song done in the style of the theme tune to an old Western TV show like Rawhide; “The Seagull” is a lovely song about, um… a piano-playing seagull (and Portsmouth were much better at the call-and-response seagull noises than the New City of Milton Keynes, apparently. Jermaine actually asks us how far to the sea from here.  Milton Keynes certainly isn't a port. Or even a New Port.  Although there is  Newport Pagnell just down the road...).

The pair obviously go back a long way and it shows in their comfortable relationship onstage. I’m sure they’ve told those gags about the muffin and the lift a million times already, but they have a way of making it sound fresh to me, which is all that really matters.  I mean, how many times has Keith Richards mouthed "I love this job" at the camera every time he plays the guitar solo in "Satisfaction"?  The newer songs sound pretty good (although they’re not all 100% successful. It’s easier to laugh at songs you know because you're not having to concentrate as hard to catch all of the lyrics). The older songs are, of course, rapturously received: the ones from the first series especially. It’s good that they’re not just performing a greatest hits show and that they’re trying to offer us something new, but it’s also undeniably thrilling to hear songs like “Inner City Pressure” and “Hurt Feelings” first hand.

My favourite song on the night was probably “1353 (Woo a lady)”, because really, how often do you see a duel of recorders onstage?

Were they perfect? No. Would it be better if they were? No, absolutely not! They’re treasures just as they are and should never change. Plus I now own a pin badge saying “band meeting” and another one (which I’ve put onto my lanyard at work) saying “business time”. If that isn’t the sign of a successful night, then I don’t know what is. They’re be sorry to hear that I didn’t buy a metal reusable water bottle laser-etched with their picture though. Sorry about that. 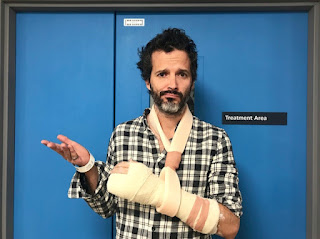 Bret broke his hand a few days after this gig and they were forced to postpone the rest of the tour until the summer.  Absolutely gutting for everyone who fought so hard to get tickets, but I now feel extra specially lucky thate I got to see them.

- Father and Son
- Deana and Ian
- The Ballad of Stana
- Carol Brown
- The Seagull
- 1353 (Woo a Lady)
- Chips and Dips
- Inner City Pressure
- Bowie
- Mutha'uckas / Hurt Feelings
- Bus Driver's Song
- Back on the Road
Encore:
- Shady Rachel
- Albi the Racist Dragon (this was a shouted request that they decided they might be able to remember. Someone also shouted “Business Time” and was just told they weren’t going to do it. In response to a “Where’s Murray?”, Jermaine just said, “fictional” and carried on.
- Foux du Fafa
- Robots
Posted by swisslet at 13:28