that joke isn't funny any more...

My team at work have developed a real liking for rubbish jokes.

I think it all started when my wife started bringing home packets of Carambar every time she returned from work. As well as being slightly old-fashioned caramel flavoured sweets that seem designed to pull out your fillings, each wrapper also has a set of jokes (in French) on the back.  These jokes are so famously bad that "blague Carambar" has entered the French lexicon as a phrase that means "cringeworthy joke".

I think part of the appeal for my team is my translations: they hand over the wrapper and I do the best I can to make sense of the joke for them.  The challenge is that many of these jokes rely on a play on words that is quite difficult to translate when you only have a somewhat functional grasp of French.

This one had everyone in stitches:

"What's a dentist's dream?"
"To live in a really big house".

I think something must have been lost in translation there.

I find myself sometimes texting some of the more baffling ones to C. for a proper explanation.  Almost invariably they just aren't funny, but it's good to know that for definite.  At least my comic mistranslations seem to be amusing. 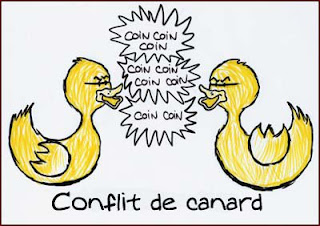 Here's my current favourite.  It's not a Carambar joke, mind.... but it did make me laugh.

Go on, it's okay to admit to me that you laughed before you groaned. Everyone does.

I have a friend who is particularly sensitive about cultural appropriation: she's a white westerner but has the most highly attuned filter to other people's possible offence that I have ever come across.  I can't help but wonder if she might pull me up on that gag because it seems to encourage the teller to adopt a particular accent in the pronunciation of that last word.

Maybe I'll tell it to her and find out.

I'll perhaps leave the props in the dressing-up box.  Some gags are good enough to stand on their own two feet.

* I may not be blogging much at the moment, but you're glad you stopped by just for this, aren't you?