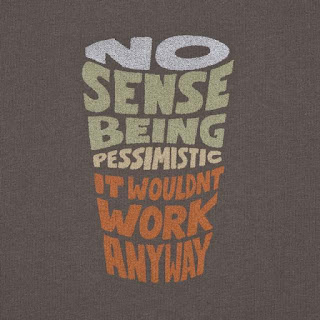 Throughout my adult life, I have often been accused of being cynical.

I actually don't really agree with this assessment at all, but I've probably only got myself to blame.  I prize critical thinking very highly indeed, and I'm also blessed with an almost complete inability *not* to say what's actually on my mind.  On the rare occasions that I have been able to keep my mouth shut and my opinions to myself, I have sadly been unable to keep exactly what I'm thinking from being easily readable on my face.

I admire this quality in other people, but I have to say that it hasn't been particularly good for my career.

Anyway.  Safe to say that I don't think I'm generally seen by people as a glass-half-full kind of a guy.

I was speaking to someone that I've known for more than a decade the other day, and he was genuinely taken aback when I suggested that I was a cynic.  He seemed to think that I was pretty much the case-study of an optimist.

Well, how else did I explain my attitude to life since my diagnosis with MS and the fact that I started running marathons?

Now I was taken aback.  I've been called lots of things over the years, but I don't think anyone has ever accused me of optimism before.

Well, it's been a little over three weeks since I ran the hottest London Marathon ever.  Since then, I've been managing a dodgy ankle, a black toenail (incredibly the first one in my running career!), a strained glute muscle, a sore knee, a possible inguinal hernia and a nasty lingering cough.

This coming Sunday, I'm going to be running the Liverpool Marathon on what is apparently forecast to be the hottest day of the year.

If that isn't optimism, I'm not sure what is.

Well, what's the worst thing that can happen?