Just as my blogging here seems to be dying off, today I had cause to remember something we did together way back in 2005. Do you even remember 2005? I ask because I've just employed someone who had graduated and was born in 1996.  You know, 2005: when everyone blogged and had a magnificent nom de plume like SwissToni, Urban Fox or Lord Bargain? 2005: when the internet wasn’t only used to reinforce your own increasingly firmly held opinions and to throw anonymous hatred at people with slightly differing but equally entrenched views? When the USA didn’t rip children away from their parents and keep them in a cage?

Well, it was so long ago that you probably don't remember, but way back in those halcyon days, we did a handwriting analysis thing.  We had participative, inclusive fun then, didn't we?  No fewer than 18 people submitted a handwritten song lyric to me for analysis by B1rdienumnum (who had read a book on the subject and was thus more of an expert than any of the rest of us). What marvellous fun we all had reading that analysis and trying to guess who had chosen which lyric. 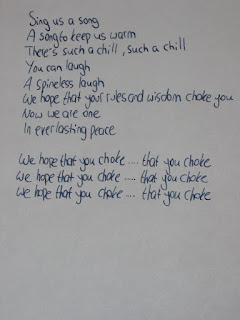 You can read the whole saga here (and just in case you can't stand the suspense, the results are here)

Heaven knows how, but in those crazy, early days when the world was new, as well as analysing handwriting, we also managed to do bookshelves, fridges and several rounds of a compilation CD swapping game.

I miss those days.

What happened to us?  Life just got in the way, I guess.

We were probably making other plans.  Or something.
Posted by swisslet at 22:33