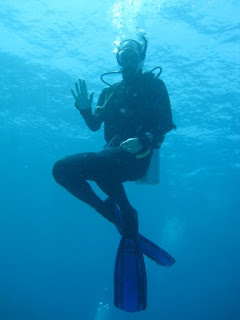 I caught the last fifteen minutes of Simon Reeves' programme on the Mediterranean the other day: he was in northern Corsica, admiring a beautiful marine reserve where fishing is banned and where you cannot dive without a special scientific permit. Reeve spent the day in the reserve with a ranger, and as well as admiring the diversity of life, they spent the day chasing around after people in huge yachts who were illegally landing on the beaches, using banned jet skis and generally ignoring all of the rules that were designed to help life wildlife thrive.

It made me sad.

At the beginning of September, we spent a week in Sardinia, just an hour or so by boat south of where Reeve was in Corsica. We were there to dive the marine protection area off the North of the island. The Mediterranean is famously a bounteous ocean that has been teeming with life since ancient times. I have to say that this isn't my experience. Although the volcanic topography over and under the water makes this a stunning place to dive, the water isn't exactly teeming with life. Why? Well, perhaps some insight into that comes from the owner of the agriturismo where we were staying: he was a lovely, jovial man, but he told us that the dive shop who were taking us out each day didn't really like him or his friends because they would come diving to hunt grouper. The fact that fishing was forbidden in these protected waters clearly wasn't a problem for him. As Simon Reeve said in his programme on Sunday night, groupers are the top of the food chain in these waters, and their presence indicates that the ecosystem was healthy. I saw one solitary grouper when we were in Sardinia. The waters are increasingly barren.

To be fair, it was a little better when we made the trip one morning to dive off Corsica. Fishing isn't banned here, and we saw incongruously huge drag nets under the water, but there are quotas. Unlike in Italy, the French clearly respect these quotas and there was noticeably more life under the water, including several grouper. I've dived in the med a few times now: off Sardinia, off the Aeolian islands down by Sicily and off Malta, and it's basically been the same story each time... beautiful water and very little marine life.

I learned to dive off Cairns on the Great Barrier Reef in 2010. This is so extraordinarily beautiful, that it probably ruins you for diving anywhere else. It breaks my heart to think that subsequent global warming means that many of those dive sites are probably now filled with bleached coral and a catastrophic decline in marine diversity.

I've read in the news this week that humanity has wiped out 60% of all animal life since 1970. Just think about that for a moment. The human equivalent of that level of de-population would be to empty North America, South America, Africa, Europe, China and Oceania.

And yet we frack and we deny the impact of climate change and we threaten to build walls against the waves of humanity trying to escape famine and war.

Humanity really is a plague species; a virus on the face of the earth.
Posted by swisslet at 20:39