On a page in your journal, answer one of Neil’s questions from A Calendar of Tales. Now write a story from this answer. This can be as long or short as you like.

“What would you burn in November, if you could?” 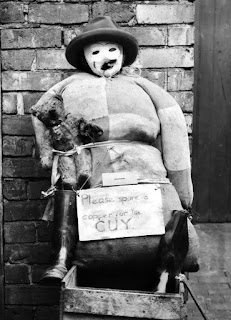 Whatever happened to duffel coats? The question popped into Joel’s mind one warm, November morning as he walked towards the bus stop on his way into work. Joel was one of those people who always seemed to be cold, but the morning had been so warm and clear that even he had been forced to seriously consider leaving the house without a coat. He’d grabbed one on the way out, of course, but the short walk up the high street was already causing the first prickles of a sweat to bead on his forehead and to trickle down the small of his back.

Novembers didn’t used to be like this, did they? Joel certainly remembered duffel coats. Not the trendy, designer label ones that you occasionally see in the Sunday paper (‘This Season’s Must-Have Overcoats’), but the heavy, distinctly unfashionable ones that your mum used to make you wear with horn toggles and that covered you from head to knees and had a tartan patterned lining. They might even have been part of the official school uniform as everybody seemed to have one. If you tried wearing one of those on a day like today, you’d melt. Maybe that was why you don’t see them so much anymore.

And it used to be colder, didn’t it? Cold, crisp November mornings where you could see your own breath on the air and where the frost would sparkle as it reflected the thin, end-of-year sunlight onto the grass. Joel couldn’t even remember the last time he saw a frost. In February maybe? Only once so far this year? The world was warmer now.

As he neared his bus stop, Joel saw a pram dumped next to the old toy shop. As he got closer, he realised that it wasn’t a pram and but was, in fact, a strange contraption fashioned from ancient pram wheels and old crates. A go-cart! Good lord! Joel could scarcely believe his eyes. When was the last time you saw an honest-to-goodness go-cart? In the age of the micro scooter, it seemed like a glorious relic from a bygone age, yet here it was. Was it possible that… Joel got a little closer and peered inside. Yes! There it was! A pile of stuffed sacks dressed in raggedy clothes, with a painted-on face and a hat at a jaunty angle. Hanging around this approximately man-shaped pile was a cardboard sign with a simple, scrawled request:
“Penny for the Guy?”

As a cub scout, Joel could remember spending cold early-November evenings with the rest of his pack putting their Guy together. The best would be proudly pulled around town in a go-cart before being hoisted up onto the bonfire for burning. But when was the last time anyone saw a Guy? And what good was a penny going to do anyone anyway? The local Rotary Club or Round Table was surely going to need more money than that. Inflation meant that you couldn’t even buy a penny chew for 1p nowadays.

Almost without thinking, Joel began to smile and moved in for a closer look at this relic from his childhood.
“Alright”
Joel leapt back in astonishment, wrenching the headphones from his ears. Perhaps he was imagining it, but he could have sworn that the…
“Wotchoo looking at?”
The Guy was speaking to him, its twisted facsimile of a face didn’t appear to be moving, but he was definitely being addressed. Joel quickly looked around him, but the street was still deserted this early in the morning.
“Um…. Hello?”
This was pretty much as good as he could manage under the circumstances, all the while looking around the doorway and underneath the go-cart and the Guy to see if there might just be someone hiding under there, playing a desperately unfunny joke. There was nobody there.

“I’ve got a problem”.
Joel blinked, swallowed and then, for want of anything better to do, opted for a somewhat tentative reply. “Oh yes?”
“Yeah. I need a bonfire. I got to get burned, you see.”
Thousands of questions flooded through Joel’s mind all at one. He only managed to get one of them out. “Why?”
“Well ain’t that a stupid question? I’m a Guy. Guys get burned. It’s what we do. It’s what we’re for”.
Joel’s head swam as his reality began to collapse inwards. He shook his head and started to think that perhaps he should just walk away from this hallucination and just get on with his day. He began edging away.
“Where do you think you’re going? I’m talking to you and I need your help. I need to get burned.”
Joel froze and, a little reluctantly, turned his head back towards the Guy. “Well, how can I help? What can I do?”
“You need to find me a nice, big bonfire and you’ve got to slap me right onto the top of it and then I’ve got to burn”.
“Um. Okay. Can I do this later? It’s just that I really need to be getting to work now and my bus will be along any minute now…”
“Do I look like I can wait?”

And so it was that, somewhat against his better judgement and definitely confounding all his expectations for the morning, Joel found himself skipping work and instead hauling an old go-cart down to the river and the site of the weekend’s scheduled bonfire and firework display. The Guy didn’t really say very much now. Perhaps he’d said his piece. The day was really heating up now, so Joel had removed his jacket and, for a want of anywhere else to put it, had wrapped it around the sloping shoulders of the Guy.

As he sweated his way down along the riverbanks, Joel reflected how profoundly strange a tradition it was to burn the effigy of a Catholic on a bonfire every year. Perhaps it was an instinctive understanding of this that had led to the slow withering of the tradition. Perhaps it was just that the burning of the Guy was a late addition to an older, far more ancient fire ritual anyway, from a time when people huddled around bonfires to stay warm but also, more importantly, to stay away from the dark. Darkness was pretty hard to find now, real darkness, anyway. But even so, people still had bonfires and they still had fireworks at this tie of the year, even when the nights were warmer and the celebration of the torture and death of a Seventeenth Century Catholic was fading from memory. Oh, for sure, it was still called Guy Fawkes Night by some people, but mostly it was just Bonfire Night, and people turned up to bob apples and to watch the fireworks regardless.

The Guy spoke only once more as Joel hauled the effigy up the pallets and branches of the bonfire site at the rugby club. “You need to keep the spark alive for the long winter to come. To ward off the darkness”.

Joel reflected on this as he caught the bus into work at lunchtime, rolling up his shirt sleeves as the day grew ever hotter, and only then realising that he must have left his coat on the bonfire.
Posted by swisslet at 09:58