gifts on the tree...

I've just spent a lovely weekend in the Peak District celebrating a friend's 50th birthday. As part of the festivities, some of us headed over to Chatsworth House to attend the Christmas market and to see the house all dressed up for the festive period.

I was dimly aware that this was 'a thing'. I think it occasionally gets covered on local news when they first get the decorations up each year and I happened to see it once. I would probably have never gone under my own steam, but as part of the birthday weekend and with some friends, it seemed like an agreeable way to spend a few hours before we started drinking again. 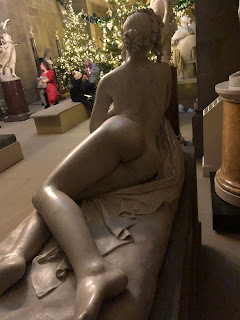 Well, the first thing to say about this is that it is certainly a fascinating spectacle. Chatsworth House and its grounds are absolutely splendid, of course. The house is beautiful and contains art dating back 4000 years (you have to admire how resolutely the British have pillaged the world over the years, don't you?) and the grounds themselves were designed and landscaped by Capability Brown. It's something well worth visiting in its own right. If it was up to me, I'm not sure that I would necessarily think that picking a theme of "Christmas Around the World" and then dressing each of the rooms accordingly with Christmas trees and the like would really enhance the appeal of the place. Then again, I voted to remain in the European Union, so what do I know?

It's certainly hard to argue that this doesn't appeal to people: there were cars lined up all the way into the grounds, and a shuttle bus taking people in who hadn't thought to pre-book their parking. As we queued up for our 11:30 slot inside the house, the board outside told us that every single 15 minute slot to enter the house was booked up for the whole day. The Christmas market was absolutely booming too, with people queuing up to get some viking drinking horns and scented vegan candles. 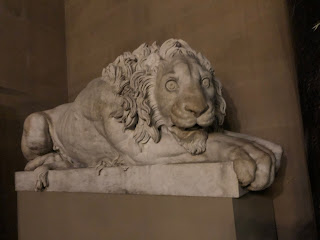 I enjoyed my afternoon very much. The tour of the house was fascinating on several levels: it's always a pleasure to look at ancient sculptures and other artwork of varying quality (I have a soft spot for any painting that includes lions, where it's immediately clear that the artist has only got a very passing idea of what a lion actually looks like. There's one ceiling painting here where the artist seems to think that lions have human faces), and some of the wood panelled rooms are absolutely beautiful. However, it has to be said that it was also fascinating watching people in Christmas jumpers ignoring all of this so that they could take pictures of themselves in front of plastic Christmas trees in a room dressed to represent China. There was even a chap dressed in a top hat wandering around and making irritatingly loud conversation with visitors in an alarming mockney accent as though he was one of the servants. Lovely.

Still, each to their own and it certainly made for a very interesting walk around. 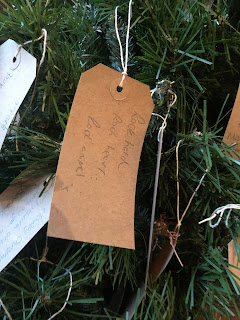 I left my traditional Christmas wish on the tree too.
And we bought some biltong.
Posted by swisslet at 15:56

Email ThisBlogThis!Share to TwitterShare to FacebookShare to Pinterest
Labels: compliments of the season, friendship