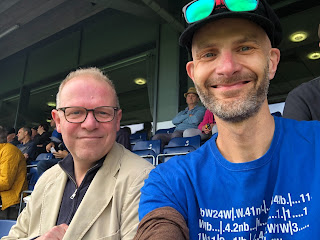 My friend Richard died last week.
He was 51 years old.

It's all come as a bit of a surprise. I had a good long chat with him on the phone on the morning after the election, and I was chatting with him via Messenger right up until last Thursday. He apparently died on Friday, although I don't know any of the details.

A couple of weeks ago, at the 22nd edition of the annual Christmas party I have with some other friends, I was only laughing with someone that it won't be too much longer before we're meeting up at funerals. I wasn't imagining that this would be happening quite so soon.

I met Richard around 5 years ago when he was a contractor working on the same project as me. We worked pretty closely for a few years, but we had many things in common, similar backgrounds and a shared love of history, cricket, music and beer. When his contract was up, we stayed in touch. Facebook makes this sort of thing very easy, so even though he was mostly in Southwold and I was in Nottingham, we exchanged messages most days.

Richard was a fiercely intelligent man. He was utterly wasted in IT because he had one of those keen, questing intellects that roams far and wide, devours books and unexpectedly brings into the conversation analogies from the British colonial past and even further afield. I think he was, at heart, a conservative with a small 'c', but he was especially engaged and agitated by the political shit-storm around Brexit. He was fervently in favour of remaining in Europe, aghast at the stupidity of the Leave campaign but also profoundly optimistic that the catastrophe would never happen. We had many, many long conversations on the subject, and I almost never failed to feel out of my depth as Richard brought to bear a rich depth of knowledge of Britain's history in the European project. He was certainly no fans of the lesser talents who filled the modern Conservative Party, that's for damn sure.

Our last telephone conversation was around 8am on the morning after the election, as the dust was beginning to settle on Boris Johnson's landslide majority. Richard sounded tired after a long night watching the results, and he expressed a firm desire to move to New Zealand to escape this tired old country.  Of course, he won't see the consequences of that election result, and I will do my best to keep some of his optimism alive, whatever happens.

I was fortunate to spend more time than usual with Richard this year. As well as our annual get together for drinks with old colleagues, we spent a lovely day together at Edgbaston for the first day of the Ashes series and another couple of days watching his beloved Warwickshire demolish Nottinghamshire at Trent Bridge in the county championship. I think it is Richard's love of cricket that will stay with me. I have many memories of meeting up with him at the hatch to the Larwood & Voce pub inside Trent Bridge at various intervals during the Test Match over the years. Several of my cricket-loving Nottingham friends will remember Richard as the guy who was always in the squash club bar because he didn't like sitting in the sun and they have a big television screen and a decent bar.

He was a drinker and a smoker, for sure... but what kind of an age is 51? I've known people who have died before, of course, but this one has left me with a genuine sense of loss.  Richard was a kind man and a good friend with a pin-sharp mind that he could never entirely turn off, no matter how drunk he was.

I will remember him fondly and will raise a toast of an excellent Belgian Christmas beer to his memory and will toast his memory at the cricket from now onwards.

Email ThisBlogThis!Share to TwitterShare to FacebookShare to Pinterest
Labels: RIP