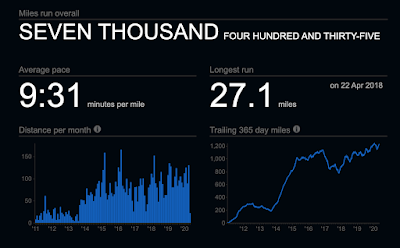 The only person I'm competing with is myself.

I fight a constant battle with myself to stop feeling as though I'm slow and getting slower. I do run a lot of my miles at a relatively sedate pace, much of it with my wife.... but I enjoy those miles, and quite often these days it's me holding her back because her natural pace is sort of between gears for me and it's easier to just run a little slower. I also know, deep down, that it's true that I can run a lot faster than that when I want to, and I have done as recently as last year in the races I do for my club. Hell, I do intervals once or twice a week and I do it then too. It's nice to throw off the shackles occasionally, to not worry about my spasming legs or my stiff ankle or my creaky knee and to just run as fast as I've ever run before. My 10k PB was about this time last year, and it should have been a couple of minutes quicker again, but I got stuck on a narrow path at the start because I'd started too far down the field and got caught behind runners I should have started in ahead of.

Ah, this stuff is boring, I know.  I don't blog for months, and when I do come back with something, it's just a load of crap about running. I'm sorry/not sorry about that. Running has played a huge part in helping me to keep my mental health on an even keel over the years, but of course it's even more important now that everything else has gone on hold. The ability to go outside for a run once a day is absolutely priceless to me and I'm so grateful that I've been able to make the most of it and that I live so close to the river and some nice, spacious running routes.

I was looking at the graphs above and thinking about my running journey. I started tracking my runs in about 2011/12, at about the same time as I started taking running more seriously. I joined Sweatshop Running Community about then and started going out more regularly than just one short run a week. Running with other people seemed to really make me work harder and run faster too. Three years ago, I joined an England Athletics registered running club and started wearing a club vest and running in actual, sanctioned races.  All of this, of course, after my 2009 diagnosis with multiple sclerosis.

Never mind the fact that I've now tracked nearly 7500 miles worth of running, just look at those graphs. The one on the left shows a track of my monthly mileage - those spikes are the peaks of training immediately before marathons, of course. Most interesting is that graph on the right, showing a rolling tally of mileage over 365 days. You can really see that sharp climb up to that first marathon in 2015, but what interests me is what happens next: there's a dip in 2018 -- ironically, running 4 marathons in a 12 month period means that I actually did less mileage over the year because there are 4 months where I'm doing very little as a taper towards race day.. but after that dip, my mileage has steadily increased to track at around 1220 miles for the last 365 days. 481 miles so far this calendar year.

So sure, I've got problems with my legs and ankle and I'm maybe running a lot of that mileage more slowly than perhaps I might like.... but I'm doing okay, considering.

What's keeping you sane?
Posted by swisslet at 18:43

Email ThisBlogThis!Share to TwitterShare to FacebookShare to Pinterest
Labels: exercise as therapy, running, stats are great, we do not talk about running club