It feels as though a lot has happened since my last post at the end of February. How can it even be possible to write a catch-up post that encompasses everything that happened during the course of the longest month since time began?

I don't think I'm even going to try.

Suffice it to say that the big news around here is that I've finally shifted across to a mesh wifi system. I've been meaning to do so for some time because, although my broadband is fibre optic and in theory very fast, in practice it's handicapped by constantly dropping wireless signal and the need for endless router reboots. Well, those issues are firmly in the past, let me tell you.

As the New Yorker so elegantly put it in their cartoon today: 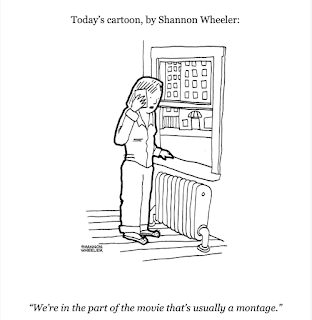 A brief montage of my March, then: we went to Austria and had a lovely week skiing that became a bit weird when it became clear that everything was going to be locked down and things started to close. We made it home on the last day they were operating flights from Salzburg, and we've been in lockdown here pretty much ever since.  Luckily for me, the new job that I started at the beginning of March is home based, so I'm obviously well-equipped to remote work. I miss my running clubs and I'm not uploading sessions for the group I coach onto WhatsApp, but the fact that I can still go outside for a run once a day makes all the difference to the way I feel. If I couldn't run, I don't know what I'd do.

Isn't it weird watching how people come to terms with the restrictions and how, as a society, we seem to have moved from panic buying toilet roll and pasta to loudly judging other people for how well (or otherwise) they're sticking to what they perceive to be the appropriate social distancing guidelines/rules from the government and assessing how well other people understand the concept of 2m of social distancing.

I also can't be the only one to feel slightly uneasy about our slide into "hero" culture for those people who work in the NHS or for other critical services. It's lovely to hear people coming out at 8pm on a Thursday night to applaud these "heroes", but at the same time, the best way to recognise these people is to pay them properly and to make sure they have the right equipment, isn't it? The Health Secretary may wear an NHS pin badge on his lapel, but he is part of a party that has systematically starved the health service of the money it needs to run effectively.  Let's hope people remember that when this is all over and we're next at the ballot box. And don't get me started on that tool from Wetherspoons. As for the clapping itself, I'm reminded of the mentality that some people have towards the armed forces, as skewered by Larry David in Curb Your Enthusiasm.

On a positive note, I think the MS charities have been doing an amazing job trying to keep people with multiple sclerosis up to date on the latest thinking on how the virus might affect us. It's all very well to try and reassure people that many of those people dying are old or have an underlying condition, but that's of little comfort if you are old or do have an underlying condition. It's a strange feeling to think that, if I were to catch coronavirus and die, someone would shrug and say, "Yeah, well he had MS, so.....".

Here's a really interesting post on shift.ms about how suffering from a chronic health condition like MS actually prepares you well for this world of social isolation.

"Compared to the rest of the population, we are all used to:

- Being stuck in limbo, nobody can ever tell us how long something will last and if it will be permanent, temporary, relapsing remitting or progressive.

- Living with uncertainty. We all know only too well that nobody can predict what the future holds for us and that we have to plan as best we can, but always live in the present."

Well worth a read.