I had a consultation with the neuro-rehabilitation unit at a local hospital towards the end of last year. I was seen by a specialist registrar, senior neuro-physiotherapist and a senior orthotist. Quite the collection of experts. They've just copied me in on the report.

1) "On examination, this gentleman is tall at 6' 5"" -- note how many experts it took to notice this particular detail.

2) "We believe that running marathons and training to run the marathons might exacerbate some of his symptoms." -- Oh dear. Luckily, they weren't finished there -- "Therefore, our physiotherapist advised him to alternate different modes of exercise between running marathons".

This isn't really news to me. At least they're not daft enough to suggest that I stop running altogether.

I always used to swim a couple of times a week, but when I started running marathons in 2015, everything else kind of fell by the wayside. I've also done a particularly large amount of long mileage runs over the last 18 months as I completed 4 marathons between April 2018 and April 2019. That would probably put a strain on anyone's body, never mind one with bio-mechanical issues brought on my a loss of strength on one side.

Since the Vienna marathon in April last year, my monthly mileage has actually probably gone up a bit. Two other things have changed though: I'm not doing the really long training runs you need in order to train for a marathon; I"m also running a lot of my miles more slowly, either with the group that I coach, or with my wife. This is reducing the amount of strain I"m putting on my body.

I'm not saying that I'm never going to run another marathon. After dipping under 4 hours at Chester in 2018 it's true that my desire to run 26.2 miles faster has all but disappeared. Am I interested in putting in the work to shave a few minutes off that time? Not really. 3.45 doesn't sound much better than 3.58 to me. Especially when you consider how much work would go into finding that extra few minutes. So, I'm not interested in going faster, but I am perhaps still interested in running a marathon with my wife again.... Vienna in April 2019 was a joy from start to finish. I don't have anything planned this year, but I am doing a 15.6 mile trail race tomorrow at Belvoir, so we'll see. 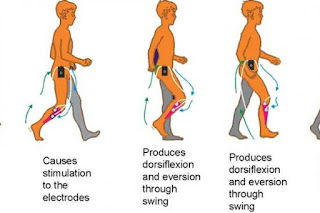 One other output from that consultation with the neuro-rehabilitation unit in November was an appointment with the FES team in Derby, which I attended this week. For an hour or so, I had a device attached to my left leg that fires electric pulses down the leg to stimulate the flex in my ankle. It feels a bit like a TENS machine (if you remember them), and it looks like I might be able to borrow a unit for 6 weeks or so to see if it makes any difference to my running. In all honesty, this kind of device is generally used to help people who are essentially immobile to walk again, so it feels a bit gratuitous to strap it onto someone who is still capable of running a marathon... but we'll see. They seem interested to find out how it helps a runner. Watch this space.

223 miles of running so far this year with another 15 or so to come tomorrow before February is out. I ain't doing so bad.
Posted by swisslet at 18:28