It's been a little while, so how about we have a go at one of these?

To be honest we never really got too much of a summer, did we? I don't actually mind the changing seasons, and I quite like it when the nights draw in and we start heading into the cooler, crisper weather. It is nice to see a bit of sun though, eh? I'm hardly a sun seeker, so it's not that I've been pining for a beach holiday or anything like that... it's just nice, isn't it? Mind you, given that we've not really had much super-nice weather this year, and given that I'm almost always wearing some sort of hat, I still seem to be getting mottled, sun-damaged skin on my shaved head. Go figure. Another one of the manifold indignities of ageing, I suppose.

For a band that once said they would break up after releasing their very first record, this is now the fourteenth studio album by the dear old Manics. I hopped on board right at the beginning with copied cassette version of Generation Terrorists (NatWest! NatWest BarclaysMidlandsLloyds! Black horse apocalypse!) and I've been pretty firmly on board ever since. I'd still passionately say that The Holy Bible is probably still in my top three records. Some people say they've been dialling it in for years, but I actually love the way that their music has opened out and become more melancholic and elegaic as time has gone on. I've only listened to this album in full a couple of times, but it actually started to come to life for me when I was listening to some of the Nicky Wire demos on the bonus material. This song probabaly isn't the best on the album by any stretch of the imagination, and the "boys from Eton" lyric is maybe a bit obvious now, but the passion in Wire's demo really struck a chord with me and the song lodged itself in my cranium. You can't argue with that after all this time, eh?

"Never Enough" - Greatest Showman / "Be Our Guest" - Beauty and the Beast

During lockdown and throughout the pandemic, my choir has been meeting on zoom and we've been recording tracks together, recording our own parts in our rooms at home, sending them in and then having the pleasure of listening to our work put together as a full choir. It's been brilliant and I've really enjoyed it. In the past, we've often done songs that I'm not that big a fan of, but they've almost always been great fun to sing. This last season, we've been singing medleys from the musicals: Mary Poppins (including a comedy cockey accent on the Bert bits), Les Mis, Jesus Christ Superstar. None are particularly to my taste, but they've been tremendous fun to learn and to sing. As well as those three, we've also been doing a Greatest Showman medley and a Beauty and the Beast medley. When I mention the former, people tend to get very excited and ask me which songs we're doing and if we're doing this or that particular tune. The answer, I'm afraid, is that I don't know because I haven't watched the film, don't know what the songs are called and couldn't tell you if the one you're thinking of is included or not. It's fun to sing, but please don't push me on this. When the weather was a bit hotter, we had some work done in our garden as the decking needed replacing. I was super-aware of the fact that I had my window open and was trying to record my part for Beauty and the Beast and was very, very conscious of the fact that this was probably shattering any delusions I may have had about being cool as a cod-French accent drifted out as I played the part of a singing candlestick (or whatever. Again, don't ask me as I've never seen it).

We attended the End of the Road festival a couple of weeks ago and it was magical. Even if I hadn't seen a single band, it still would have been worth it just to spend some time outdoors in glorious weather drinking cider with friends. As it was, I did see plenty of bands that I really enjoyed and we won the pop quiz by an embarassingly wide margin. On the journey down to the Dorset/Wiltshire border, we listened to the EOTR playlist on spotify and I discovered that I really like Arab Strap. There's just something about Aidan Moffat's soft, Scottish accent telling stories over music. We watched them at the garden stage on Sunday night, a natural bowl in the woodland at Lammas Gardens, and they were great.

"My Pollyanna loves poetry, she thinks my heaven is hell
I come on strong with a limerick, she knocks me back with a villanelle
She has only one confidant, a psychosexual shrink
I think she's wasting her money, I think we just need a drink"

Excellent. They also finished the gig with a cheery "fuck the Tories", which is also something more people should adopt. I know I have.

Sleaford Mods were headlining EOTR on the Saturday night and Billy No Mates played on Sunday afternoon. Both were excellent. Sleaford Mods in particular have been a real breath of fresh air for me over the last couple of years; a really disintictive and powerful voice for the times. I think it also helps that Jason now lives just around the corner from us and we often see him out and about. When she was still commuting to work, my wife used to see him out walking his kids to school. She started nodding good morning to him because she thought she knew him, so he started nodding back, presumably thinking the same as she was nodding at him. Now they're just on nodding terms, probably with neither quite knowing why. It's a lovely thing.

Surf's Up is an absolutely beauty of a record. Tasked with writing a hit, Brian Wilson must have caused a few confused faces when he turns in this cheerful little ditty.

It's just wonderful and beautiful. I've included this on the latest birthday CD I did for a friend's daughter. I was asked to start doing this when she was turning 5 and she's just turned 13. Well, you're never too young for some Beach Boys, eh?

The Guardian has just published a countdown of the 30 best Britney Spears songs. This isn't at number one and this is just plain wrong. As someone pointed out in the comments, "Yes. In this particular case, I would have it at number 1 and then left spaces 2-15 empty for breathing room to accurately reflect the chasm between that song and the rest of the Spears catalogue."

"We Are Never Ever Ever Getting Back Together" - Taylor Swift

In my long festival going career, I've never really ever had the energy to get up to anything much after midnight. Even more so recently, I've had to be quite careful with how I manage my energy, and my bed is usually calling me long before any of the nighttime stuff really kicks off after the headliners have finished their sets. This year, not only did I make it to the silent disco, but we stayed until about 03:30! There are two channels on the headphones, and it's really fun to watch the crowd give the two DJs almost instantaneous feedback about which one is 'winning' in the way that they respond to each song. You only have to listen to know which one is working best as you can hear everyone just singing along. I had a lovely moment at some point after 02:30 where I realised that everyone I was with was dancing along to "You've Got The Love" or "Loaded" or some other stone cold classic like that, and I was grooving along to TayTay.

I'm not even sorry. History will prove me right.

As a sidenote, the very best t-shirt that I saw at the festival was a mock up of the Sonic Youth album cover for Goo, featuring Taylor Swift and a cat in sunglasses. I want that t-shirt so badly. 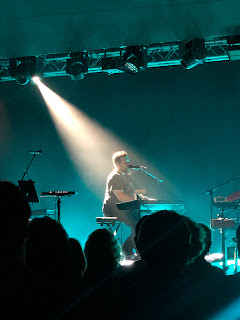 John Grant was headlining the Garden Stage at EOTR on the Friday night and he was on magnificent form. As it happens, I also had tickets to his rescheduled gig at Rock City on Thursday this week. He played a different set, but he was absolutely superb again. It was a little strange to be back in an enclosed indoor space with a crowd of a few hundred people, but Rock City wasn't sold out so it wasn't too oppressive and the music is just so good. Of the stuff from his new album, this one stood out at both gigs because Grant clearly loves singing it live and feeding off the energy of the crowd. He's a unique voice and an artist to be cherished.

I've had the opportunity to sign-up to record a track solo with our choir master. I had a long think about what song to choose, and although I nearly chose "Marz" by John Grant, I settled on this. Cash has long been my go-to karaoke choice and sits sweetly in my register, but this song is just something else. Cash's performance is obviously iconic, and I'm not sure I could ever hope to live up to that... but I'm going to have a go. Watch this space, I guess.

Here we go, Reggie. A little later than promised, but these Earworms are dedicated to you.