think of all the things we could discuss...

I make no claim to any superpowers.

None of the really good ones, anyway. I can’t fly; I’m not the world’s greatest detective; I can’t climb walls and I certainly don’t have super-strength. I do seem to have an unusual empathy though; an ability to really connect with another creature. I don’t mean humans. God! Not humans! Humans are illogical and unpredictable. Who would want to have any special insight into that?

My wife tells me that my special power is to make people want to feed me; she tells me that I have a “please love me” smile that it entirely irresistible to ladies of a certain age. Well, perhaps that’s true. And if it is, surely there are worse talents to have. But I’m not sure that I agree. People I can pretty much take or leave. I’m here for the animals.

I’m not sure when this first started, but I’ve always seemed to have the ability to connect with animals. They seem drawn to me, and I’m certainly drawn to them. It probably started out the usual way, with cats and dogs. My grandmother used to have a particularly spiteful cat called Twiggy. Twiggy was a farm cat who had lost her tail at some point in the course of her long life. I don’t know if this misfortune was the cause of Twiggy’s bad temper, but she was famously vicious; the kind of cat who would scratch your hand as you put her dinner plate down. As a result, every gave her a wide berth, which probably suited Twiggy just fine. I liked Twiggy. I wouldn’t say that we were best friends, but 5-year-old me and 15-year-old Twiggy rubbed along alright, much to everyone else’s amazement. Mind you, I liked all animals, Twiggy was just one of the first in a long and growing list. There’s a picture of me from about this time, sitting outdoors with my feet up, reading with one hand reaching behind me to tickle a dog. I think that’s still me in a single picture. 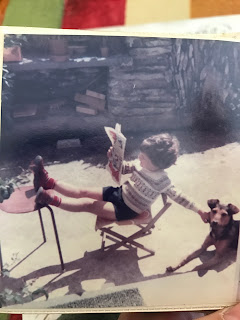 Growing up, I was a member of the Young Ornithologists Club, the Tufty Club and pretty much anything else that involved animals. Well, okay, the Tufty Club was about crossing roads safely, but who wouldn’t want to be in a gang with Tufty Fluffytail, Minnie Mole, Willie Weasel, Harry Hare and Policeman Badger? I still have the badge…

Did you know that every spider is Scottish and speaks with a broad Scots accent? Wherever they might be found in the world, they originally came from Scotland and migrated. None of them have lost their native accents. They’re all exactly as Scottish as Groundskeeper Willie in the Simpsons. We have a really big one that lives in our house. She’s so large that you can hear her footsteps when she walks on bare floorboards. She only has seven legs too, having lost one somewhere along the way in her adventures. Perhaps wisely, the cat gives her a wide berth. She’s called Aragog, and whenever I see her, muttering in her distinctive accent as she goes about her business, I’m certain that she’s the wisest creature in the house.

Most animals have names.

How I know this, I couldn’t say, but these names are definitely not my invention because that would be ridiculous. Every wood pigeon calls themselves Joe Cool and the only words they say, Groot-like, are Joe Cool. “Joe Cool? Joe Cool”

Robins are all called Winter George.

Gray Squirrels are all known as “Fatty Lumpkins”. This one is based on how they can be seen every autumn gorging themselves on hedgerow fruits, but it suits them all year round. I do know a squirrel called “Lazarus”, but that’s because he rose from the dead and chose a more appropriate name for himself. Dogs have a variety of names, depending on personality rather than on breed: scuttlebutt, waggles, side-eye, soft-as-shite… that kind of thing. There are also a few dogs that can clearly talk, and probably have a library filled with leather-bound books and a smell of rich mahogany. One or two smoke a pipe.

I think you probably get the picture.

It is, of course, extremely rude to walk past an animal of any kind without saying hello in an appropriate tone of voice. If accompanied by a human, it is always the animal that should be addressed first.

Please don’t think that I’m alone in my madness: my wife was brought up in France as a child and was taught to hiss at cats. These days, she has learned to approach them respectfully, address them by name and offer the appropriate courtesy to see if they deign to acknowledge her presence. And you can’t blame my good influences for the change, either. Her mother tells me that, when she was a child, my wife couldn’t walk past a herd of cows without giving them a cheery “Bonjour madames les vaches!”. Obviously, we both do this to this day. After all, we’re not savages. Did you know that rabbits are actually “lapin d’affaires” and often run successful businesses from their warrens? No? Well, not a lot of people do, because they’ve never taken the time to ask.

Perhaps I’ve said too much. I don’t want to betray any confidences.

I’m told that I have a particular soft spot for the animals that no one else loves: vultures, rats, hyena… In the Serengeti a few years ago, we came across a pack of hyena sitting rather sadly underneath the carcass of a gazelle that a leopard had stashed in the fork of a tree that they couldn’t quite reach. One was sitting very sadly with is head resting on his paws, and, as we passed by in our jeep, he turned to look at us and he was missing an eye, presenting us with a rather grizzly, empty socket. Of course, I thought this was marvellous and just loved him all the more.

Lots of people love animals, I know. But how many talk to them? Really talk to them, I mean. And how many of them listen to the answers? You should take a tip from me and try it sometime. It’s surprising what you can learn, and your lunchtime walk will never be the same again.