I know we'll make it anywhere 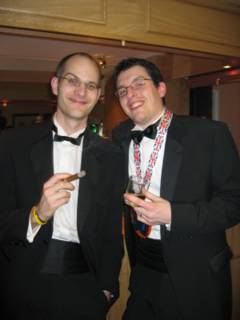 The Ultimate Olympian and I share some triathlon training tips at his 30th birthday party on Saturday night....

As you probably worked out, I had more or less decided on Friday that I would do the London Triathlon in August this year. All I need to do now is to complete the application form, which I'll probably do next week, and then get on with some training and trying to raise some sponsorship.

It's a pretty big deal:

I'm not altogether sure that my body will survive the strain. Still. Months to go yet, but already I feel like I have something worthwhile to train for. I don't want this blog to become just a tedious list of the exercise I have been doing, but to show I mean business:

Saturday morning: 40 minute run (I reckon it's about 5 miles - burning off nearly 700 calores according to my heart rate monitor)

I'm knackered - although possibly that could be something to do with the excellent party I attended between those two sessions.... (happy birthday mate! I'm pretty sure that vigorous dancing to classics like 'Ghostbusters' and 'Dancing on the Ceiling' probably counts as an exercise session in its own right, no?)

I don't know if any of you lot would be interested in sponsoring Team Ultimate Olympian at the Triathlon this year, but we're looking into how to put up a page that will enable us to take online pledges and stuff.... it's for a great cause.

Watch this space, I suppose.