I can't be your friend unless I pretend 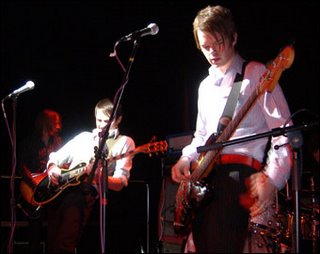 The Social is a great venue. It's pretty small and probably holds about 150-200 people at the absolute maximum. It's a bit like going to a concert in your front room. It's even charmingly s-shaped, so that if you are standing near the doors at the back, you can't actually see the stage at all. I've been here several times before, but this is actually the first time I've come in for a gig, and as soon as I walked through the door, I felt as though I should come more often. It's a proper venue for seeing and discovering bands. It's nice and intimate. Even from the back of the room, you're pretty close to the band. Or maybe I only think that because my last gig was in an Arena.

The Feeling don't actually need discovering. Their current single - "Sewn" - was released last week and has just gone into the UK singles chart at number 7. They're doing pretty well, thank you very much. The band are just finishing off a tour of smaller venues before they head out on tour supporting The Charlatans. Needless to say, they've been getting quite a lot more interest at their gigs over the last couple of weeks since the single began to get significant airplay.

Lord B and I turned up late as usual, and arrived just in time to catch the band playing their first song (can you imagine if you come to see a band like this and they play the song you know first? It's the kind of thing radiohead would do... ). They didn't play "sewn" first, but the crowd remained politely interested in their other stuff. They are pleasant enough. As guitar bands go (they comprise 2 guitars, keyboards, bassist & drummer) they are at the poppier end. I was just trying to put my finger on who I would compare them to (I was thinking someone like Electric Soft Parade or Haven - something like that), when Lord B leaned over to me and absolutely nailed the comparison: The Feeling sound exactly like 10cc, possibly with some Supertramp or ELO thrown in, and with just a tiny dash of Huey Lewis & the News. Snigger if you want, but there's definitely more than a little hint of 1970s MOR about their sound. Sometimes it's just blatant theft. I honestly didn't think it was impossible that they would play a cover of "Life is a Minestrone". Still, stranger things have happened. The mullet is back for one thing.

I was a little disorientated by this revelation, but they were still perfectly pleasant to listen to. There was a little bit of chatter going on during their set, at least behind me, but not too much, and this soon stopped when they played "Sewn". It probably goes without saying that they have been getting quite a lot of attention recently as a result of this song. I have to say I think it's largely deserved. It's a little bit more contemporary sounding than their other material, and features some nice harmonies and has some killer "na na nas" in the chorus. What more do you want from a song? This sounds like damning it with faint praise, but it sounds like the kind of song that wouldn't be out of place on the soundtrack to some glossy US TV show like "The OC" or something. It's gentle, melodic, tuneful and catchy. It sounds sunny. It's a good record, and we all sing along. It brings the house down (and for the first time that I can remember at a gig, I saw more than one camcorder being wielded in the crowd as people try to grab a piece of the action). The Feeling are starting to happen, and it's this song that's making it happen for them. They got up at 6am, they tell us, because they had to go and queue at the American Embassy for the visas they will need when they go out to promote this single. Claudia Schiffer jumped the queue apparently. Does she not know who they are?

A little oddly, it's not their last song. "This one will be our last song. It's called...." at this point there was a fatal pause and I wanted to scream out "....anticlimax", but I didn't and the band pressed on anyway as people began to leave. It was a good enough tune though and at one point the singer commanded us to stop being cool over near the bar and to clap our hands over our heads. The room is so small, and Lord B and I are so tall, that I actually think he was talking to us, so we rather self-consciously joined in....

And that was it. The whole set lasting about 45 minutes. Oh, and by the way, apparently the bassist (on the right in the picture above) is married to Sophie Ellis Bextor (in spite of the fact he looks about thirteen). As we left, the bouncer was busy singing "Murder on the Dancefloor" to himself, so I assumed she was in the venue somewhere and we'd just missed her. Oh well (she could have been the support act for all I know).

The verdict? Not bad. Where bands like the Arctic Monkeys have obviously taken their cue from punk and new wave bands, it's kind of refreshing to see a band whose influences are totally different (and make no mistake, some of those cheesy MOR bands had some amazing tunes). They're a little poppy for me though. I like to rock a bit more, and this lot may be the weediest 2 guitar band I've ever seen. That's just me though. They tick all of Lord B's boxes - he thinks they're great.

Thanks for all your birthday wishes, by the way. I had a nice day and I really appreciated them all....
Posted by swisslet at 23:11