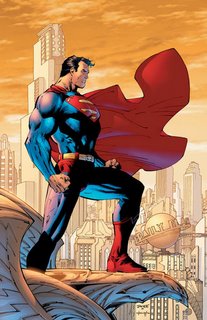 Check out this article by Neil Gaiman and Adam Rogers on the myth of Superman:

"Jerry Siegel and Joe Shuster, two Jewish kids from Cleveland, created him as a character in a newspaper comic strip. But the strip didn’t sell, so they reformatted it and flipped it to a publisher hungry to buy content for one of the first comic books. When the story appeared in the premiere issue of the anthology Action Comics, kids went crazy for it, as if there had always been a Superman-shaped hole in the world and it now was filled....Other heroes are really only pretending: Peter Parker plays Spider-Man; Bruce Wayne plays Batman. For Superman, it’s mild-mannered reporter Clark Kent that’s the disguise – the thing he aspires to, the thing he can never be. He really is that hero, and he’ll never be one of us. But we love him for trying. We love him for wanting to protect us from everything, including his own transcendence. He plays the bumbling, lovelorn Kent so that we regular folks can feel, just for a moment, super."

Personally, I've never been that bothered by Superman. I find characters like Batman and Spider-Man are much more interesting because, although they have some amazing abilities, they are not all-powerful. It is their fallibilty and their weakness that makes them interesting. Superman isn't even human, never mind fallible or weak.

Anyway, as Gaiman points out in the article... Batman has the Joker and Spider-Man has Doctor Octopus and the Green Goblin. Poor old Superman never even had any good super-villains to fight, and generally had to make do with natural disasters or a bald, but seemingly very persistent, burglar.

I saw the trailer to the new film the other day. Instead of making a fresh start, it looks as though they are going to follow on from the end of the old films starring Christopher Reeve. It's an interesting idea and I suppose it's a positive sign that the new film was directed by Bryan Singer - the director of the first two X-Men films. Even that bit of news just serves to remind me that I find the X-Men much more interesting characters as well. They've always seemed to have more depth. Apparently Superman is faster than a speeding bullet and can jump tall buildings with a single bound. Oh really? Well that's interesting. Did you know that the relationship between Professor Xavier and Magneto could be read as an allegory of the relationship between Martin Luther King and Malcolm X?

See what I mean?

And yes. Of course I will be going to see the new Superman film when it comes out.
Posted by swisslet at 20:41