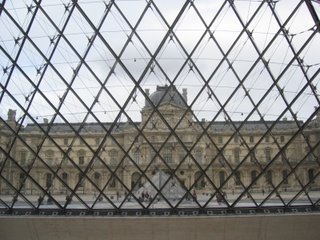 I looked really, really hard for Mary Magdalene and the Sacred Feminine. Honestly I did, but she's just not there. I'm afraid that I am left with no alternative but to tell you that Dan Brown has been talking out of his arse.

Oh - you knew that already?

I don't know if you've ever been there, but the Louvre is massive. I'm sure it's perfectly possible to spend weeks on end in there and still not have enough time to look at everything. You certainly can't do it all in a day. In fact, it's so damn big that I'm sure they have to send out search parties every night to rescue any tourists that have managed to get lost between the Mona Lisa and the Venus de Milo. I'm sure 'twas ever thus, but I do get annoyed in galleries when I am trying to look at some work of unsurpassed beauty and I keep getting jostled by people who are entirely fixed on a single destination. In the Louvre this is the stampede to get to the Mona Lisa (although thanks to Dan Brown, there is now also a significant knot of people in front of the "Madonna of the Rocks" talking sagely about Mary's non-existent threatening hand gestures). Perhaps it's just me, but I don't even think the Mona Lisa is all that. She's actually rather small and pretty unremarkable if you ask me. There are other pictures by the same artist in the same gallery that are much more interesting. 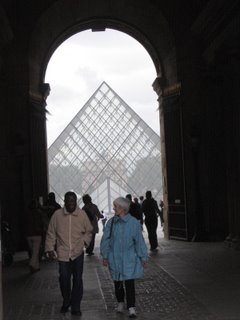 There's no accounting for taste, eh?

Still. As well as Da Vinci I managed to get a good look at art by Vermeer, Titian, Veronese, Tintoretto, Monet... as as well as the veritable deluge of medieval annunciations, pietas, madonnas with child (medieval artists apparently only having about 6 different scenes that they liked to paint).

It's an amazing place. We spent three hours in there - as much as I could take in - but I will be going back. 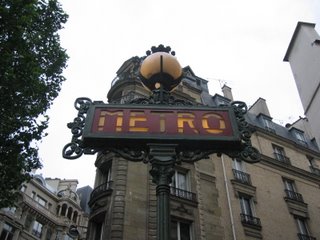 Of course, Paris is a pretty cool place in its own right. We stayed in a lovely little hotel near the Pantheon, ate in a very nice traditional brasserie near the Sorbonne and did a whole lot of wandering around. 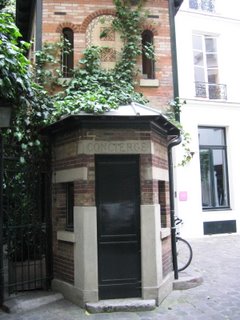 The city is quite a pleasing mix of the old and the new. It's very obviously a modern, bustling capital city, but it's not hard to close your eyes and imagine how the city must have looked in the past. There's the obvious monumental architecture: Notre Dame, the palace of the Louvre, the Eiffel Tower, the Arc de Triomphe, the Pantheon, the Sorbonne, the Pont Neuf... but there also seems to be a bit of history buried around almost every corner - from Metro signs to a little building for a concierge glimpsed through a doorway to an appartment building.

We were only there for a day and it wasn't enough. I still haven't been up to Montmartre and had a look at Sacre Couer either. Another time. We did manage to get to the Rodin Gardens though... keep your eyes on Stand By Your Statue for more details (or have a look at flickr) 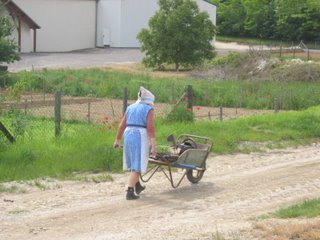 Then we headed out towards the Loire to spend some time with C's parents. Very relaxing - good food and excellent wine. Generally I spent my time lounging around reading a book, but we did find the time to go on a tasting expedition to Sancerre where we bought ourselves a few bottles to be laid down in C's dad's cellar until they are ready. 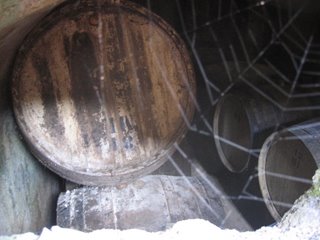 Sadly this is not the cellar in question, but rather the view through a little window in the town of Sancerre itself.

And then back to a rainy Birmingham and home...