got your cards marked and they're coming for you... 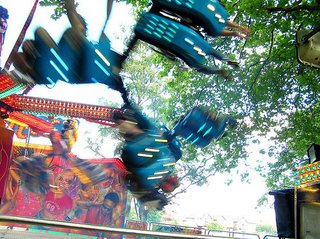 As I went for my run along the river Trent this evening, I couldn't help but notice that something is going on: the river between Trent Bridge and the Toll Bridge is swarming with boats of all shapes and sizes and The Victoria Embankment has been closed to traffic as an assortment of rickety looking fairground rides are assembled by gangs of pikeys with sledgehammers.

It must be time for the Riverside Festival again.

Throughout the weekend two large stages present local, national and international roots and world music artists. A series of smaller venues provide children's entertainment and there are a host of street performers. The Embankment is also home to a street fair with both old and new attractions, including steam organs, funfair rides, river activities and craft stalls.

On Saturday evening at around 9.15pm there is a procession of illuminated boats on the river, followed by a breathtaking firework display."

Sounds brilliant, I know (who could resist a procession of illuminated boats?), but I'm not sure that even that eulogy can do the majesty of this festival justice. It doesn't mention the big marquee filled with little stalls selling fudge and cookies. It doesn't talk about the fortune tellers or the cider stands. It makes no mention of the magnificent stuffed animals that you can win at the fair - you know, the kind that will burst into flame at the mere *thought* of a naked flame. There's ropey burger bars, places selling candyfloss and bags of "olde worlde" sweets. Hell, there's even a British Army Recruitment stand and display area.

What more could you possibly want?

I have some fond memories of this festival - my absolute favourite being when I was wandering around the funfair one evening with a bunch of mates and we realised that there was a guy dressed in a gorilla suit dancing on the roof of the ghost train. As one man we all gawped, pointed and then shouted out "Clarence Beeks!".

Unfortunately, I'm going up to Harrogate tomorrow night to go and watch the cricket at Headingly on Saturday. This means I'm going to miss the whole damn thing. Procession of illuminated boats and all. By the time I get home on Sunday evening, all that will be left of the festival will be the piles of litter left behind by the carnival folk.

Still. As I watched those guys hammering together those ropey looking rides, I couldn't help but wonder how many people are seriously injured in funfair related accidents.

However many it is, I'm amazed it's not more.

** photo stolen from Psycho Crow - check here for the complete set he took at the festival last year....
Posted by swisslet at 19:30