I was catching the sparks that flew from your heels and trying to catch your eye... 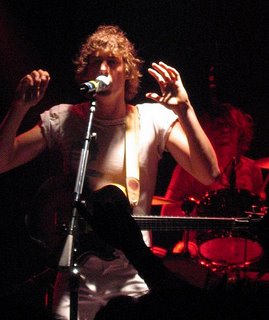 After yesterday’s debacle, I was in absolutely no hurry to drag myself out of the house and into town for another gig. Thanks to some inside information from Cat, who had seen Razorlight play in Aberdeen on Saturday night, we had a fair idea that they weren’t going to be onstage until 21:45. We therefore opted for a leisurely pub tea and a couple of pints. After a false start in the Slug & Lettuce, we soon landed on our feet when we walked into the Cock & Hoop. More pubs should be like the Cock & Hoop: non-smoking, small and cosy, serves proper beer and has an excellent menu. They usually stop serving food really early, so we were really only popping in for a pit stop before heading on to a local kebab and burger emporium for our tea. Actually, we soon found out that the kitchen was still open, and after a quick consultation, Lord B and I both decided that we would run the risk of missing Razorlight coming onstage for the sake of a proper homemade burger and chips and another pint of decent beer.

It was great. The food was delicious, the stereo was playing an eclectic mix of tunes (Coldplay, The Velvet Underground, Mercury Rev, David Gray) and we soon discovered that our 22 year-old waitress was a massive, massive music fan. Favourite song? “Pretty Green” by the Jam. Best gig? Eric Clapton, The Who and Bob Dylan all on the same day (I know! That’s what we said!). Favourite genre of music? Folk. She was great, although I don’t think she was too impressed when Lord B called her a weirdo. It was rolling around to half-past nine by the time we decided we should probably head on to the arena, so paid the bill and said our farewells to our lovely waitress. My parting shot? Having had a good discussion with her about the Leonard Cohen version of “Hallelujah”, I casually mentioned how I had once seen Jeff Buckley performing live.
“Really?”
“Yes, at Reading in 1994. He was very good”
“Oh really? Oh Wow, I’m so jealous.”
“…yes, I was waiting for Gene to come on”

With that, we left.

We timed our arrival perfectly. Just enough time to see that the band weren’t on, to get a pint and then head down to the arena floor before the lights fell and Razorlight took to the stage. Cat, you’re a gem.

They played for a little over an hour, and I thought that they were pretty good. What can I say? They played “Golden Touch” third song in – which I thought was the sign of a confident band - and they brought the house down. From that moment on, the sell-out arena crowd was largely eating from the palm of their hand. They were good too. Johnny Borrell certainly isn’t a shrinking violet, and he strutted around the stage staring out into the crowd, looking impossibly skinny and dressed in his trademark all white. They played some of their old stuff (“Leave Me Alone”, “Rock & Roll Lies”, “Vice”, “Stumble & Fall”, “Rip It Up” and so on….) and a lot of their new stuff (which I don’t know quite so well, but included their recent number one single “America” as well as stuff like “In The Morning”, “Kirby’s House” and “Somewhere Else”). For a guitar band, they’re quite poppy, but this works quite well live when they are naturally a little bit rougher around the edges than they are on record.

My attention drifted a bit in the middle. Razorlight have got some good songs, but they’ve only got two short albums to their name, and I’m not sure that’s quite enough material to comfortably hold my attention in an arena. To be fair to them though, if they continue developing at their current rate, in a couple of years time (and with a couple more albums under their belts) they are going to be sensational. Or perhaps Johnny Borrell’s ego will have devoured the band by then (and it is clearly all about him). Maybe they didn’t entirely win me over, but they were very well received by the crowd. By their very nature, arena gigs seem to attract a much more varied crowd than smaller venues, and this seems to result in a more open and less cynical atmosphere. People are willing to be impressed by the band, not waiting to see if they will be. If I was occasionally a bit distracted during Razorlight’s set, I only had to look around me though to see people absolutely captivated by them. In stark comparison to my irritating neighbour at the Raconteurs gig on Monday night, yesterday I found myself standing next to a 10 year old girl who was at the gig with her dad and her younger sister. She was wearing a Razorlight t-shirt, and she was clearly absolutely mesmerised by them. Occasionally she would climb up onto her dad’s shoulders to get a better view and to try to take a photo on her mobile phone. Most of the time though, she was just standing, captivated by the band. I think she was impressed by what she saw and, jaded old gig cynic though I am, it was lovely to watch.