live a simple life in a quiet town... 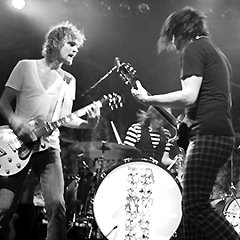 Watching the Raconteurs last night, I think I’ve worked out what it is that Keane are missing: - spontaneity. The ability to use the song as a base for launching out and just playing from the heart. I’m not saying that Keane don’t play from the heart, but where Tim Rice-Oxley is rather constrained by his choice of instrument and the slightly elegiac nature of his songs, Jack White and Brendon Benson are able to use the song as a starting point for letting rip. It would be wrong to say that this makes the Raconteurs a more soulful band than Keane, but they certainly seem a lot freer and more experimental. I think, at heart, I am also something of a guitar man. There’s just something about a well-struck guitar power-chord that reverberates around my soul.

Did this mean that the Raconteurs were a better gig than Keane? Absolutely not. There’s a fine line between being free with the interpretation of your songs and being self-indulgent, and I’m afraid that the Raconteurs fell comfortably on the wrong side of the line. I like to see bands doing more than just reproducing their recorded material at a gig, but neither am I a fan of overly long, duelling guitar solos played at a volume so high that it distorted everything else and made everything else sound muddy.

It’s not that the Raconteurs don’t have the songs either: in preparation for the gig I had spent much of the afternoon listening to “Broken Boy Soldiers”, and it’s pretty good. It’s a decent combination of White’s howling blues with the rather gentler Benson, and in “Steady, As She Goes” they have a stone cold classic. It makes it all the more of a shame then that I found them dull to watch. Dull, and astonishingly loud. My ears are still howling in protest – bearable when you’ve been to a good gig, but otherwise an irritating reminder of a disappointing night out.

I can always tell when a band isn’t up to much at a concert because I allow myself to be distracted by the ephemera around me. In this case, ‘twat at gig’ was very much in attendance. Lord B and I were standing just in front of the railing around the mixing desk. In theory this is good because it gives you somewhere to lean back and enjoy the show. In practice this is a bit of a nightmare, because as the crowd ebbs and flows around you, you have nowhere to go. What started as a bit of backing into me, soon developed into a full on “rush hour on the London Underground” sensation. Although I hesitate to complain about the tall bloke standing right in front of me (after all, I do that to people at every gig I have ever been to), where I will draw the line is at the goon next to him with no awareness of personal space. Actually, he was worse than that. What started out as a bit of harmless backing into me soon developed into a full on wrestle as he obliviously attempted to shoulder his way between me and a girl standing next to me so that he could stand on a little ledge on the mixing desk. I moved slightly to accommodate him, only to find that he then spent the whole gig either elbowing me slightly out of time to the music, or waving a cigarette about an inch from my face. Grrr.

And just to make myself sound even more like a grumpy old man (if that’s possible), I don’t usually mind smoking at a gig, and Rock City is now a fairly well ventilated venue, but yesterday was horrible. Everyone standing around me seemed to have a fag on the go, and by the end of the set, my eyes were stinging and my clothes were stinking. It’s not so much the smoking I object to as the total lack of consideration some smokers show for anyone around them as they blow their smoke straight at you and wave their butt ends carelessly towards your clothing. Roll on the smoking ban.

Actually, none of this would have mattered if the band had been any good. Tonight, sadly, they were shit. I’m a big fan of Jack White and had been really looking forward to this gig. It should have been aces, and even though the band encored with a stomping version of “Teenage Kicks”, I thought they were lousy. I left feeling disappointed, tired and grumpy – and as we headed towards the car park, I wasn’t too surprised to see the band’s bus pulling away. Done, done and onto the next one?

I hope Razorlight are a bit better tonight.