a trail for the devil to erase...

It's been a while right? Well Jenni has posted up her review of my CD. I'm not sure if she wants me to post a direct link or not, so so in the meantime I'll just put up an explanation of why I chose the songs I chose.

I know that there a loads and loads different theories on making a compilation. Hell, I even subscribe to some of them (track 1, side 1 should always be MASSIVE. It should grab the listener by the throat and wrestle them to the ground. Think "Smells Like Teen Spirit" or "Screamager" or "Back in Black" or "Enter Sandman" or something like that. BOH!). After some consideration, I decided to ignore all the rules. I was really pleased to have drawn Jenni, and I wanted my shuffleathon CD to tell the story of how I've ended up listening to the music that I'm currently listening to. I realised that this would take me through a shouty heavy metal phase that might not be to my target audience's taste, but I also wanted this to be honest.

This is a snippet from Spaced. In fact, it's this scene. Mostly included because it makes me laugh.

And so we begin. "The Riddle" was the first album that I bought for myself and Nik Kershaw was the first artist who I really dug. You may only see a pouting midget with a terrible mullet, but I will always see the man who inspired me to write to Jimmy Saville asking if he could "Fix It" for me and my best mate Will to meet him. Jimmy never wrote back.

I had to download this song to include it on this CD, and I have to say that it still sounds remarkably good. It's got a great lyric too. Bad news for all those seeking the answer to the riddle though - apparently he made it all up and it doesn't mean anything at all.

I discovered heavy metal by accident when I was 13. By accident? Well, I bought "Number of the Beast" by Iron Maiden because I loved the album cover. I had no idea what they sounded like. It is a great cover though, and there are probably worse reasons for buying an album 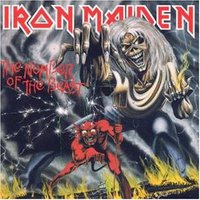 ...and I liked it. From there, there was no stopping me. I listened to some terrible shit (Poison? Slaughter? Whitesnake?) but I also discovered some brilliant bands that I still listen to today (Faith No More, Led Zeppelin, AC/DC, Iron Maiden...) Deep Purple were never really on the A-list but I absolutely loved this song. The first CD I ever bought was a ropey compilation album called "Protect The Innocent". It contained some rubbish, but the first four tracks on the first disc were "Born to be Wild" by Steppenwolf, "Paranoid" by Black Sabbath, "Fireball" by Deep Purple and "Ace of Spades" by Motorhead. It doesn't get much better than that. What marks this song out is the absolutely ludicrous keyboard solo in the middle. Utterly overblown, but completely brilliant. For me it's representative of that whole period.

If you think the story of how I discovered Heavy Metal is bad, perhaps I should tell you how I discovered Bob Marley when I picked up the "Legend" compilation because I thought it was by Bob Dylan....

"Blood Sugar Sex Magik" is probably the album that rescued me from Linkin Park. Well, perhaps not, but it was certainly the album that started to shift my music tastes away from metal. The band themselves were still a long way from the melodic, all-conquering band that we hear today, but this was the album that showed that there might be more to the Red Hot Chili Peppers than funk metal goons with socks on their cocks. "Under The Bridge" is the song that typically gets all the plaudits, but I've always preferred this one. It's just incredibly soulful and I don't think I've ever heard such a heartfelt guitar solo.

I hated the Stone Roses. For a long time they (together with the Cure) were symbols of everything that I hated about music in the late 80s. Why? Because I wasn't listening to them with my ears, I was paying more attention to the people at my school who liked them. They were all wankers, ergo the Stone Roses were wankers.

Wrong.... It took me several years, but luckily I opened up my ears for long enough to find out what an idiot I was being. "The Stone Roses" is one of the best albums recorded. Full stop. An object lesson in not judging something without listening to it.

I was wrong about The Cure too.

Ah. The song that changed my life by the band that totally changed my musical direction. The Smiths were another band that I had missed first time around because I decided that I hated them without hearing them. By the time I sat down and really listened to them, I was a first year undergraduate at university and it was a time in my life where I was ready to listen to these strange songs about alienation. Like millions of teenagers before and since, I felt that Morrissey was speaking directly to me, that he understood.

I don't think I've ever recovered.

Other songs have spoken to me more loudly than this one, but this was the one that got me started.

I have Mark Preston to thank for this. He was a "mature student" on my course at university (well, he was 25) and he introduced me to the more eclectic pleasures of musicians like David Bowie, Johnny Cash and Scott Walker.

I have a lot to thank him for.

I've spoken about Scott Walker here many times before, but there is something about the combination of that voice with the bleakness of many of his lyrics that really strikes a chord with me. This song is a case in point: it's inspired by the Bergman film of the same name and tells the story of a knight playing chess with Death for his soul.

Cash's legacy is monumental. You only have to listen to the "American Recordings" to know that. Funny then that the first Cash song that got me interested was "Daddy Sang Bass".

He's now famous for his covers of songs by people like U2 and the Nine Inch Nails, but I've always liked this. It's a cover of a track by Bruce Springsteen and although it pre-dates his work with Rick Rubin, it's very much a taste of what is to come.

Ah, fey indie. We're now an awfully long way from Motorhead now, aren't we? The Auteurs were runners up to Suede in the 1993 Mercury Music Prize and they were bloody robbed. "New Wave" is a work of genius and although I occasionally listen to Suede's debut, it's the Auteurs that I keep coming back to. 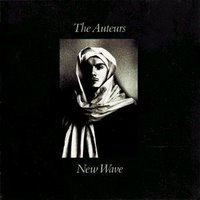 There's something about the jangley guitars and Luke Haines' weariness that make this song perfect. It's in my all time top 10. Possibly.

My mate Mark used to refer to this lot as "Welsh heavy metal". Perhaps he was right, but "The Holy Bible" in general, and this song in particular, will always remind me of the term I spent in Venice in 1994. I have vivid memories of wandering back to my flat at about 3am through a completely deserted city with mist rolling in across the lagoon.

It was magical, and this was my soundtrack.

More fey indie, and another band that I hated on principle before I actually listened to them. I hated the whole idea of this band and the indier-than-thou attitude I felt that they represented.

"If You're Feeling Sinister" is the album that turned me, but this song is the one that I love the most. I just love the idea of visiting coffee houses and awarding certificates.

I like to think of Interpol as the band that best represent my record collection. They are white. They have two guitarists, a bassist and a drummer. They play slightly spikey indie rock. Their lyrics are faintly depressing. The singer sounds like a cross between a lawyer and an undertaker.

I think they're great.

Jamie T's ode to a night out on the Stella is included because it was both the last single I had downloaded and the last gig I had been to when I made the CD, and it was thus entirely representative of where my musical journey had taken me.

We're back to 'Spaced' again, and it is finally all over.

I'm not sure that this runs all that well as a compilation in the traditional sense. It's probably far too downbeat for one thing.... but hell, it's a little meander through my music taste.

It's also my damn party!

Just one CD to go, and we're done. Nearly there.