but just for a short while.... 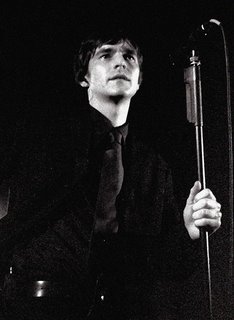 I think the Bluetones are ace. Where many other bands in the same position might have given up the ghost years ago, the Bluetones are still plugging away. The band had their biggest hit ("Slight Return") way back in 1996. It made it all the way to number two, only being held off the top spot only by Babylon Zoo's Levi Jeans powered hit, "Spaceman". Their debut album, "Expecting to Fly" debuted at number one, and although they've had seven top twenty hits in all, you might say that it's been all downhill since.

You might say that, but I'd say that you were wrong: The Bluetones may not trouble the chart much any more, but I think that they've been getting better and better. "Luxembourg" is a fantastic album, for starters, and the new album has been getting some excellent reviews.

Look at the songs: as well as "Slight Return", the Bluetones are able to offer up stuff as good as "Solomon Bites The Worm", "Bluetonic", "Marblehead Johnson", "Never Going Nowhere", "Autophilia" and "Cut Some Rug".

They're a good show too. They don't pretend to be something that they are not, and they just seem comfortable enough with themselves and with their fanbase to just get on with their set. Singer Mark Morriss has an easy banter with the crowd - responding to a fan's request by interrupting their setlist to play "Autophilia" but then also calmly ignoring the same fan as he tried to dictate what came next for the rest of the set.

What else can I say? They were good. I saw them last November, on the same day that Sarah found out that her request for a sabbatical had been accepted. Well, she's in Vietnam at the moment, and today was her birthday. Happy Birthday Sarah - Lord B and I both raised a glass to you, and, if we'd told them, I'm sure that the Bluetones would have done too.

And now, if you'll excuse me, my attention is being drawn to the small matter of the first ashes test of the 2006/7 series between Australia and England at the Gabba in Brisbane. It's nearly half-past twelve in the morning and I have to be at work tomorrow, but it's the Ashes innit? No Monty Panesar, we lost the toss and Steve Harmison opened up with a wide... but we can still do it, right?
Posted by swisslet at 20:06