falsehood merchant, nobody believes you...

Evening all. Earworm time again. My internal jukebox is still alternating between Nelly Furtado, Panic! At The Disco and vintage Iron Maiden, so it's probably just as well that I'm handing the keys over to a Guest Editor with a much more varied and interesting musical palate than my own rather blunt instrument.

If bloggers were musicians, then I rather think that she's probably the virtuoso lead guitarist, multi-instrumentalist, vocalist and song writer to my rather lumpen bass player.

Ladies and Gentleworms, without further ado, it is my great pleasure to present for your earworming pleasure, TAFKATUF....

Earworms of the Week - Guest Editor #51 - Lizzy from Literary Hoax

MY WEEK IN MUSIC – Lizzy Hoax

I heard this lo-fi garage rock song in a dream in the small hours of Monday morning. When I awoke, it was still playing. As you can imagine, this confused me for anything up to a minute. Looking out of the bedroom window, I saw the fit man from two doors down slumped and snoring in the front garden, while his phone rang loudly from his lap. Perhaps it was his worried boyfriend? Perhaps it was a wrong number? I don’t know. Anyway, this song was his ringtone. It annoyed me, because I hate waking up suddenly to songs. They stalk you all day.

When Tanya Donnelly left Throwing Muses, rumours circulated that she would soon join Egg Might Wake. They were entirely without foundation. This song sounds like Billy Idol being dropped down a lift shaft.

Yes, a song that is over 14 minutes long if you include the cymbals solo at the end. Inconveniently, I have a rare form of musical OCD which requires me to sing the entirety of any song which I find myself humming. I didn’t get much done this Tuesday as a result.

This is the club anthem that samples the Bernard Matthews Turkey Drummers advert from 1988. (Sorry, non-Brits: I doubt you know of these high quality meat products at all, let alone the attendant promotional campaign from nearly 20 years ago.) It includes the classic mother-son exchange: “Did it rain?” “Not all the time!”, mashed up and looped with a Timbaland-style Indian drum track. I feel obliged to say “Bootiful!” now, as a weakly amusing verbal tie-in. But the track’s useless, so I won’t.

5. Mine All Mine – Double Poinsettia On Ice (bonus track on ‘Christ & Co’ EP)

The first and last festive entry. This song is quite rare even among hardcore M.A.M. fans, so how it kept waltzing into my shower all week, I have no idea. It’s on Mine All Mine’s 1992 Christmas EP which is unfeasibly hard to find. The “John Major’s got no baubles” chorus dates it terribly, but it holds up rather well apart from that. Sort of like Tina Turner gargling paint stripper over a Polyphonic Spree B-side. That good.

Probably the only song in my collection that rhymes “faecal contamination” with “Ascot train station”. For that, I can almost forgive its relentless hounding of my synapses last Wednesday. The saxophone intro can go to hell though.

7. White Crime – If Dick Thought It Would Help (He Would)

How this electronica bleepfest managed to hijack my internal jukebox this week, I really couldn’t say. I only heard it once and that was while walking past someone’s car. It must have hooks like a scorpion. Why do some songs do that? Why do some people drive a convertible with the top down in winter? Why do attention-seeking maniacs install enormous bass bins in their cars so that one’s teeth rattle at 140 bpm when they drive by? Or is the clue in the question? Hey, if I had all the answers, I wouldn’t be talking to you now. I’d be on a beach with Joaquin Phoenix. But would I really be happy?

The original singer from Riga once threatened to punch me. This exchange took place outside the Spread Eagle pub in Camden in the summer of 1996. Admittedly, I had just written a a review saying his band made Menswear look like Motorhead. I stand by that statement, and the rest of the band dismissed it good-naturedly as fair comment. Which meant his suicide attempt in the Dingwalls gents’ later that night came as quite a surprise. He moved to Bournemouth 3 months after that strange night, without telling anyone but his sister. I hear he still makes music, after a fashion. ‘Fuerteventura Kidnap 1982’ was recorded shortly after Riga got their current singer, Jo Pinto, but it’s still the same old fey jangly shite.

9. Dominik Pringle – Not Even With Yours

Dominik Pringle is the pseudonym of someone very famous indeed. I won’t spoil it for you, but you’d almost certainly recognise him if you saw him. Here’s a clue: he’s married to someone really thin. Go on. I bet you can guess. This is standard R&B, incorporating a cameo-by-numbers from a middle level American rapper, and boasting a video full of gyrating nubiles. Our host would love it.

I was hoping for some peace and quiet today, but I’ve been mumbling this shouty electropop to myself all day. Inexplicably, it performed really badly on release in the UK but was huge in South America. The woman behind it made enough money to retire, just from the Peruvian market alone, or so the music industry gossips claim. Good on her, I say. It’s a great song and you really ought to buy it, or your record collection will have a yawning chasm where it ought to be. In fact, the void will be so big, you might fall into it. Years would pass before you were found. Your friends would shake their heads sadly and resolve never to let their own music collections fall into such disarray. Small children would devise innovative new insults derived from your name. Don’t say you weren’t warned.

Thanks Lizzy. I have to confess that I'm a touch disappointed that Cliff Richard hasn't made it onto your list this week... but apart from that it all sounds aces! (erm, not that I've actually knowingly heard any of it, that is... stuck in the pale, indie guitar ghetto as I am).

Running the gauntlet of all those nasty festive songs next week will be Ben.... as I happen to know that he refuses to listen to anything in December apart from his "Now That's What I Call Christmas" album, I think we're in for a real treat.

Oh, and don't forget I need your votes for Earworms of the Year 2006 (and thanks to everyone who has voted so far....).

Toodlepip - We're off down to London tomorrow. No, not for shopping (although if we don't have Square Pie for lunch in Selfridges tomorrow, I imagine that C. will want to know why). We're there to have a nice meal and to take in the Velázquez exhibition at the National Gallery on Sunday. Las Meninas has remained in the Prado in Madrid, which is a shame as it is a magnificent painting, but they've shipped loads of other stuff over, so it should be great. 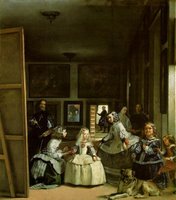 Next Week: Ben
Forthcoming attractions: Sarah, Earworms of the Year 2006, Flash *AND* just possibly we may have our Mexican correspondent with an audio earworms post....