take a walk on the wild side...

Are you familiar with Ray Mears? 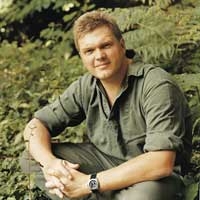 He may not look like it, but this slightly chubby fellow is one of the world’s foremost experts on bushcraft – the art of surviving and thriving out in the wild through the application of skill and knowledge rather than the use of equipment.

I’ve just spent a happy hour watching Ray and his friend Nigel (I think he was called Nigel) walking around wetlands picking up leaves, eating flowers, turning stinging nettles into string, baking duck’s eggs, trying to spear fish…. You know, the usual kind of stuff. I think he was trying to recreate the lifestyle of the hunter-gatherers who wandered around the land in the middle stone-ages, in a time before iron pots, knives and Tesco Metros. Something like that anyway.

Apart from the fish – which took him six hours to successfully spear -- it all looked distinctly unappetising. As they tucked into some water lily seeds, exhaustively crushed into a grey paste, wrapped in nettle leaves and baked in the fire, I couldn’t help but think how worthy it all was (especially when the seeds turned out to be disgustingly bitter).... And yet it was somehow still fascinating.

Mind you, if Ray Mears has been living off his wits in the wilderness, he certainly looks well on it. C. has long said that if she had the choice of anyone (else) in the world to be stranded in the wilderness with, she would certainly pick him as she would definitely never go hungry. She might be eating bitter grey sloop, but she wouldn't be hungry...

As I watched Ray getting excited over some 1000 year old soil that had been dug up in a marshy woodland (he actually tasted it. It was very smooth, apparently), my mind started to wander a bit…. I wondered whether there were conferences for experts in Bushcraft.

I bet there bloody are. I bet they have one at the NEC.

I imagine that they don’t need much catering provided for them, although I should think they need watching like hawks to make sure that they don’t try to start any cooking fires on the exhibition floor.
Posted by swisslet at 21:39