oh you know that I'd do anything for you.... 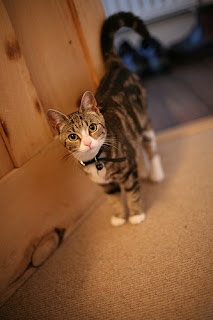 Goodness me. Who knew that such a small thing could soak up so much attention?

She's adorable, of course... but she's also skittish, prone to begging for food and just now discovering all about climbing on the kitchen surfaces.

The RSPCA advised us that we should keep her indoors for 6 weeks before we start to introduce her to the outside world, so although we can make a fuss of her when we are at home, when we're at work she's left all on her own inside the house (well, a couple of rooms anyway). Hen kindly came in to check on her at lunchtime today, and reported that she was all curled up and fast asleep. That was good to hear, but it does mean that when we go to bed, she's wide awake and eager to wander around her new home exploring.

Did I mention that she has a collar with a bell and a couple of tags on it?

.... until the small hours of the morning when she decided she wanted a bit of smooch and jumped on the bed in search of a tickle, which obviously involved making sure that we were both fully awake and actively responding to her polite (but insistent) requests.

It's funny really - to look at her you'd think that butter wouldn't melt in her mouth. Ha! She's been here for less than 2 days and I am already completely under her spell.

I think the Ancient Egyptians had it about right: cats are a higher form of life and we are their slaves.

Now if you'll excuse me, I am being summoned to worship.
Posted by swisslet at 22:30