An unexpected by-product of the alphabeticon is that I appear to have a whole pile of "Whatnos" in my head. The letter "A" seems to have been dominated by the lack of Abba in my collection. It's not something I've ever really considered to be much of a loss, to be honest, and I never really understood the whole ironic we-love-Abba thing that happened a few years back. Still, having said that, I do have a soft spot a mile wide for this song. Perhaps it's because I'm a historian?

Abba are inextricably linked in my head with this band, for some reason - perhaps that's why I can take the swedes seriously. Once Abba was lodged into my head, this earworm wasn't very far behind. Still, it's another good historical song, eh? I bet they researched long and hard before writing these lyrics. Ever heard a better summation of this period in Russian history than "Oh those Russians!" ??

I like Athlete. I like their quirky, plinky-plonky sound and I even quite like the way that Joel Pott manages to sing slightly off the beat every single time he opens his mouth. I loved their debut, "Vehicles and Animals" and I liked the follow-up, "Tourist"..... imagine my disappointment then to discover that I thought that their new album was turgid and unimginative. What a shame.

Although it's not really typical of the rest of the album, in some ways this song sums it up: it's the Athlete sound blown up and given the full-on Coldplay production treatment... except that it somehow still sounds a bit limp and empty. It appears to be a song about global warming, but the pay off is weirdly passive:

As I was reading earlier this week, not so much a hurricane as a gust of wind.

Still managed to worm its way onto a loop on my internal jukebox though. I'm seeing them live in a few weeks, so I'm hoping this will grow on me. I want to like it, I really do.

> Hope There's Someone - Antony and the Johnsons

Another one to thank the alphabeticon for, but this one is an absolute corker. The first time I heard any of Antony's music was when he played this on Jools Holland a while back. Utterly breathtaking. He's a real one-off and this is a magnificent song.

> When You Were Young - The Killers

By far and away the best thing on "Sam's Town" and almost as good as "Mr. Brightside". Almost. I heard this on the radio the other day, and it made me think that, although I loved the song, I had strangely absolutely no desire to see the band at Glastonbury this year.

> In Between Days (acoustic) - The Cure

Stef was raving about the Greatest Hits album the other day, and I asked him if he had got the special edition with the bonus disc featuring acoustic versions of all of the tracks. No, he didn't. Oh, it's really good. So I made him a CD and posted it on. I'm sure it only took Robert Smith about an hour to knock this lot off on his acoustic guitar, but it's really good.

Worth seeking out if you haven't already got it. A bonus CD worthy of the name.

For obvious reasons. That was a great World Cup too, and this song will forever remind me of it.

"You're a nut. You're crazy in the coconut"

Bloody alphabeticon. Am I going to be earworming tunes in alphabetical order for the next however-many weeks?

> Bullet in the Head - Rage Against The Machine

RATM never seem to be far away from my head these days. Usually it's "Killing in the Name", but I actually heard this being played on the radio the other day (I think, although perhaps on reflection it's more likely to have popped up on my iPod when I was out running. Nothing like a bit of furious rock to pick your knees up when you're feeling a bit tired).

As they're apparently reforming, I'm holding out some hope that one day I might actually get to see them live.

There's been nobody else quite like them. End of story.

Oh, stop rolling your eyes. I actually like this.

I know that there's something eminently puncheable about Kate Nash, and a large part of me wants to loathe this record... but the simple fact is that I can't shift it from my head. Yeah, I like The Streets and I like Jamie T, so perhaps I have a certain predisposition for this kind of thing. Mind you, I can't abide Lily Allen.

Yes, there a mannerisms aplenty to hate in this record, but there's still enough vulnerability and sheer invention to make this a joy to listen to.

Billy Bragg is a long time hero of mine, and this song is an absolute corker. Bragg is as much a politician and a stand-up comedian now as he is a musician, but this is a real reminder of the punk scene that spawned him and is his tribute to the Clash. Billy Bragg being Billy Bragg, this song is available to buy as a limited edition 7" single only and all proceeds are being donated to his (fantastic) Jail Guitar Doors charity.

The man's an institution and I love him dearly.

> In the Air Tonight - Phil Collins

It was an advert that caught my attention immediately: something about the juxtaposition of a Phil Collins soundtrack and a gorilla sat behind a drum kit. I had no idea where this was going, but the very idea of it made me smile and made me pay attention. Of course, when the song kicks in proper with that drum break, it brings the house down.... but don't just take my word for it, see for yourself.


Quite what this has to do with Cadbury's Dairy Milk is beyond me, but the very fact that I'm talking about it here means that the campaign is working. You'll not see a better advert this year, and I guarantee you that this song will be winging its way up the download charts as we speak.

Whisper it quietly, but it's a pretty good record too, no?

Shuffleathon is back. Be a part of the solution, not part of the problem... or something. 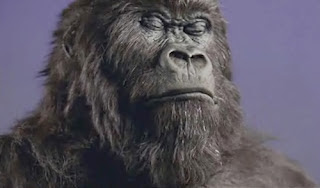 A guy in a gorilla suit playing the drums to a slightly naff 80s classic.

...I wondered what happened to Clarence Beeks
Posted by swisslet at 23:42