to reach the unreachable star 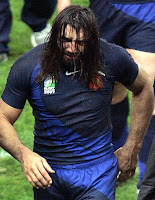 In spite of the fact that her mum is from Halifax and her dad is from Stoke, growing up in France has always meant that C's sporting allegiances have generally been pretty clear to her: allez les bleus.

In the old days, when England used to hammer France in the rugby with glorious regularity, I would occasionally receive a phone call at half time asking if she could change sides, but the answer was always no. I think the last time this happened was in the semi-final of the last World Cup in Australia in 2003. We were in a bar in Amsterdam surrounded by enthusiastic Frenchmen, whose excitement at the early Betsen try soon tailed off as their side got hammered in the pouring rain. My philosophy is that if you nail your colours to the mast (and C. tends to wears a France shirt on these occasions), then you have to take the rough with the smooth. Since that morning in Holland though, the French have beaten England more often than not, and it's not an issue that has ever come up.

This has been a rollercoaster World Cup for both England and France, so the semi-final on Saturday night was always going to be an emotional affair. Perhaps it was just as well for our marriage that I was away in Oxford for the weekend, so we weren't able to watch the game together.... a narrow win for England that dumped the hosts out of the tournament and saw the defending champions march on to a final next weekend against South Africa that seemed like a pipe dream only 4 weeks ago.

C's dad may have lived in France for 30 years, but he's definitely an England fan. His son has no interest in sport at all, so I think he quite enjoys having a son-in-law to talk sport with and quite often rings up after a game (cricket, football, rugby.... anything will do) to have a chat with me about it.

Picture the scene in our house after the England v France game when the phone rings:

C: "Hello daddy. He's not here. If you were thinking about gloating, don't bother".
C's dad: Oh. Right. I'll talk to you another time then.

I heard on the radio this morning that one of the key reasons why Barack Obama is so far behind Hilary Clinton in the race for the Democratic nomination is his colour. Now, sadly that doesn't really come as any great surprise to me, but what did make me pause for thought was how some people are rationalising this racism -- and this was backed up by a vox pop from a bar somewhere -- apparently "Obama" sounds a bit like "Osama". Coincidence? Many American voters apparently think not. That's like saying that you wouldn't dream of voting Labour at the next General Election in the UK because "Gordon Brown" sounds a bit like "Incompetent Clown".