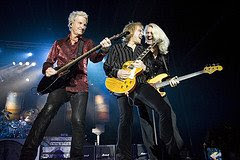 Exactly one year to the day since I got married to my lovely wife in beautiful, sunny Vienna. It was a truly fantastic day, and one that I want to remember fondly for the rest of my life. So how else could I possibly want to spend the first anniversary of that happy day except by leaving my wife and home and going out to watch one of the cheesiest MOR bands in the world perform some of the greatest power ballads ever written?

And they've got a relatively new album out that they want to plug? Perfect. Just perfect. Everyone loves an old band pointlessly trying to flog new material.....

The band formed in 1971, but their heyday, of course, was in the very early 1980s. I didn't even know off the top of my head how many original band members were still in the band, nevermind how good they were now (answer: there's one original band member left - the keyboardist, although the singer and the bassist have been in the band, on and off, since the 1970s. And were they ever any good?). I do like to know what I'm letting myself in for though, and so in preparation for the gig, I forced myself to listen to their Greatest Hits album to remind myself of their material beyond "Keep on Loving You", "Can't Fight This Feeling" and "Take it on the Run" (which I think everyone in the whole world probably knows).

Maybe I wasn't doing it any favours by listening to it over my laptop speakers whilst cooking in the kitchen, but it didn't seem to have aged very well. C. asked me to turn it off and put something else on.

Oh well. I have a memory like a sieve for dates, so as with all the gigs I attend, after the tickets were booked, I put the date in my diary at work and forgot all about it. It wasn't until a couple of weeks before the show that I began to get a trickle of light-hearted abuse from colleagues looking to book me up for meetings and seeing the gig there, that I realised both that the gig was coming up and that it might be seen in some quarters to be mildly embarassing. REO Speedwagon are not, after all, a very cool band.

I think it's fair to say that Rock City was perhaps half full when we arrived. There was next to no one on the balcony upstairs, and there was plenty of room for manouevre on the main floor.... so much room, in fact, that during the band's set, roadies found it easier to walk through the crowd clutching spare guitars than they did to scoot across the back of the stage. The band themselves seem to have weathered reasonably well. Singer Kevin Cronin is 56 years old now, but he looked lithe and relatively sprightly, proudly wearing a very tight fitting "Olde Trippe to Jerusalem" t-shirt to advertise his connection to the great city of Nott. Ing. Ham. (a gesture slightly spoiled by the fact that he insisted on calling the pub, where they had spent the afternoon, "The Trail to Jerusalem". Still, can you imagine how surreal it must have been for the Monday afternoon drinkers at this famous old rock pub to have the members of REO Speedwagon turn up?). I was rather taken by the drummer myself. This is what rock drummers should look like. For starters, as well as the usual quota of snares and tom-toms and the like, his drumkit consisted of not one, but two bass drums, about 10 cymbals more than seemed strictly necessary and, best of all, a gong. You can't beat a drummer with a gong. When they bring out Rock Band for the playstation, I'm hoping there's a gong attachment for the drums. The drummer himself completed the picture nicely: he was clearly of a certain age, and yet he was tanned, reasonably muscular, had flowing hair and was squeezed into a pair of tight black leggings. The other members of the band, the keyboardist, the bassist and the lead guitarist, all had the rather pleasing look of veterans who couldn't quite believe that they were lucky enough to still have this job. In fact, throughout the whole set, the band looked as though they were enjoying themselves hugely. I wondered about this for a while. How hard do you think it is to play a half-full Rock City when you can remember the days when you used to play stadiums? But watching the band throwing themselves around and reminiscing about the bars they played in when they first started out, I realised that I moan about my job all the time - how much would I give to be able to do something like this?

The crowd played their part fully. The venue wasn't anywhere near full, but I've heard sellout Rock City crowds make far less noise than this. It seems that REO Speedwagon fans are largely what you would imagine: there was a lot of long hair, a few tasselled leather jackets, some sleeveless t-shirts and an almost total absence of irony. Actually, I found this last thing to be quite refreshing. I usually attend gigs that are a whole lot more self-consciously "cool" than this, and the crowds sometimes give off an air of waiting to be impressed. This was different. REO Speedwagon have got absolutely nothing to prove to anyone, and certainly not to anyone in the venue. We were there to enjoy ourselves and to lose ourselves in the music that we grew up with. As a result, most people just let themselves go and sang along wholeheartedly. When was the last time you went to a gig where every other man in the room was unashamedly playing air guitar? Weirdly, it kind of made sense too. REO Speedwagon are probably most famous for their ballads, but actually, they rock. I haven't been to a gig that gloried in power chords quite so much since I was a teenager, and I haven't seen a lead guitarist doing that Eddie van Halen thing on his fretboard with such enthusiasm since I last saw Thunder at the Aston
Villa leisure centre in about 1990. Listening to Speedwagon play, I also realised quite how much of a debt almost every single hair metal band of the 1980s owed to them. I began to appreciate what much of the rest of the crowd already knew, that their songs aren't actually half bad. They recorded a new album in 2007, but instead of bringing the momentum of the gig to a grinding halt as everyone disappears to the bar, more or less everyone stayed to listen and were rewarded by the songs being half-decent. I won't be rushing out to buy the album any time soon.... but they still sounded alright.... Although it was still the old classics that brought the house down. Even a false start and a pretend hissy fit over the lack of sustain on the keyboards couldn't detract from the magic of "Keep on Loving You". What a song. Listen to that played live and you can easily understand how this band played stadiums around the world.

What can I tell you? It was a really fun night. The band played with a smile on their faces and with genuine good humour, and I really enjoyed watching them mess around onstage and watching their crowd greet them as returning heroes. And here's a thing... the more I looked around the venue, the more I began to see that the place wasn't just filled with 80s throwbacks and that there were more than a few youngsters in the place too. There were young couples smooching to the ballads and a pair of girls wearing Avril Lavigne t-shirts grooving next to the grizzled old guy in the Neil Young t-shirt. I reckon if the Speedwagon were to play on the main stage at a festival, they'd still pull in a big crowd eager to hear some of the most enduring songs of the 80s. Better yet, if they can get together with some of their peers, they could put on one of the best stadium shows ever. If Rick Astley, Bananarama, ABC and Curiosity Killed the Cat can tour the country playing their hits, what price REO Speedwagon, Toto, Journey, Kansas, Chicago and Boston getting together? I'd pay for that, no questions asked!

And yes, with an iPod that contains songs by almost all of the aforementioned bands, I do realise that the days when I could freely mock my friend the Pollstar for his supposed love of MOR bands are well behind me.

So, perhaps not the coolest gig I've every been too, but it was certainly one of the best this year. A really good night. And I was back home in time to give my wife of one year an anniversary kiss. Who could ask for more than that?

I'm going to listen to their greatest hits album again on Tuesday too. And I'm going to put together an MOR playlist on my iPod. Not cool, but who cares about that?