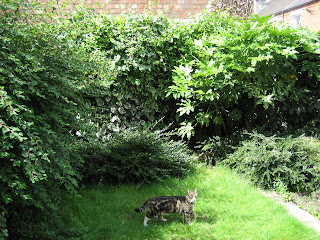 We've never really had a garden before. It's probably overstating the case a bit to even call it a garden. It was a postage stamp sized square of patchy grass, a mass of overgrown bushes and some sandy concrete that was perpetually wet underfoot. In the four or five years that we've lived here, I've barely spent any time out here, and most of that has been since last July when we picked up a cat that we discovered really loved playing stick amongst all the bushes. She loved it so much that, in the end, she actually wore away some of the grass into a little bare patch of mud where she span around chasing the stick. 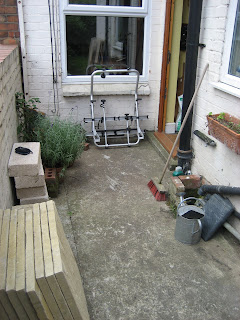 I'm not much of a gardener, but C. likes to spend a bit of time pottering around outdoors. She has especially enjoyed it since she started spending a lot more time abroad and away from home. It wasn't much, but it was a little sanctuary away from the world. A few months ago, she decided that we should do something with it, and invited a landscape gardener round (actually, a guy who used to work for C and had set up his business after C had encouraged him to seize the chance of taking voluntary redundancy). He drew up some plans, I feigned interest, and then before too long - in fact on the very same day I had my first eye operated on - he was round with this three workmen with a big skip and a load of stuff, ready to take the garden to pieces.

Two weeks later, and we were pretty much done. 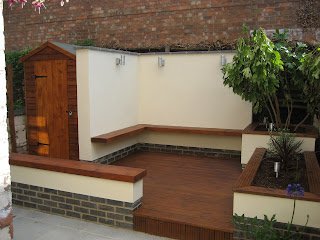 Now, even I have to admit that he's done a damn fine job... both of design and execution. I've spent more time outside this house in the last couple of weeks than I think I have ever done. It feels at least twice as large as it did before, and it's now just a really great space to just sit down and chill out in.

I've even got a shed. 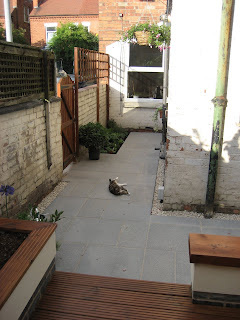 It's still a work in progress, of course, but the herb garden outside the back door is really starting to take shape, and we've already had a really lovely garden opening party out there. 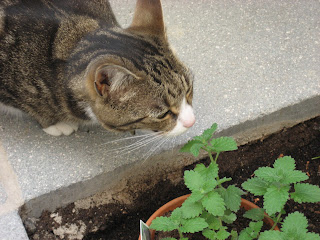 The cat's not too sure, but... to be fair... she has only just discovered the Cat Mint and the Catnip. I think she'll like it just fine.

Since the garden has been done, C. has already arranged for the fireplaces to be restored so that they can be used as open fires again, arranged for the boiler to be replaced with something worthier and only the other day we had a builder round to look at our attic. We were initially thinking that we only had room to turn the loft into useable storage space, but apparently we have oodles of room up there, and certainly enough for a double-bedroom and a bathroom.

C. has spent the last few months idly on the lookout for a bigger, three storey house in the same neighbourhood, and only a few weeks ago was seriously viewing a property just around the corner before deciding that it wasn't quite right.... I get the distinct impression that, perhaps because she's now away so much, she's decided she quite likes where we are now and is starting to nest.