don't stand in the doorway, don't block up the hall... 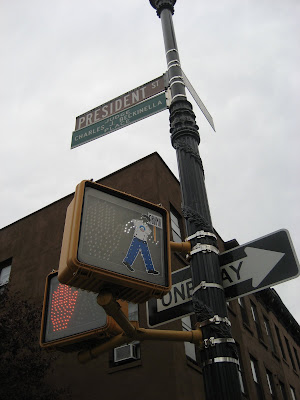 I think it's fair to say that New York is fairly pleased about the results of the recent presidential election. It's a Democratic stronghold anyway, of course, but if the number of Barack Obama t-shirts, posters and button badges on sale are anything to go by, then the Empire State is very taken with the man who stands to become the 44th President of the United States of America. Or they could just be really astute traders and know where the market is at the moment. Most likely it's a combination of the two, but I got a real sense of a genuine optimism on the air, even in cynical old Gotham itself.

America is at a crossroads.

...which is why I very much liked this particular piece of vandalism/street art (*delete as appropriate) on a pedestrian crossing on the corner of President Street in Brooklyn. I love the image of the green man, the symbol of motion and of progress, marching forwards whilst holding an Obama placard. The placement on this particular street is, of course, perfect.

After eight years of immobility, America may be about to "walk" forwards again.
Posted by swisslet at 21:02