no sleep till brooklyn.... 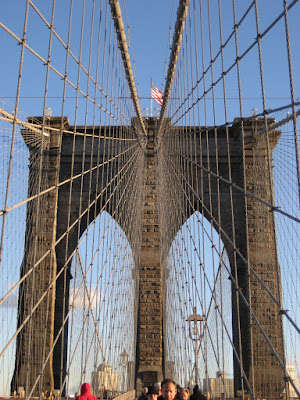 When it comes to holidays, I'm a great believer in serendipity. I'll probably buy a guidebook, but that's about it. I'll have a vague idea of the sorts of things that I might want to see, but I probably won't even open the book until I get onto the plane, never mind do something rash like actually plan an itinerary.

This trip was no different. I wanted to go to New York, and that was almost as much as I knew. I perhaps had some vague ideas about going to the Metropolitan Museum and the Museum of Modern Art, maybe having a hot dog and doing a bit of shopping, and I had a few restaurant recommendations (thanks for that Bob), but beyond that, I was really just happy to be going away for a few days to such an interesting city.

I like to wander and to see what turns up. Luckily, it turns out that this approach works really well for New York. We must have walked for miles and miles every day we were there. It only costs $2 to ride on the subway, but whenever it was practical, we walked. There's nothing better for getting a proper feel for a place than by walking through it. We were staying in a hotel about five blocks up from Times Square and about three blocks down from Central Park, but we walked through as many different neighbourhoods as we could: Greenwich Village, Chelsea, the Meatpacking District, the Financial District, Flatiron, Hell's Kitchen, Lower Manhattan, Upper East Side.... each with their own distinctive feel. We didn't manage to get up beyond Central Park and into the Bronx, and I know there's plenty of stuff we didn't see (next time, eh?), but we did manage to get around quite a lot of Manhattan in the four days we were there.

One of the best pieces of advice I was given before I left (thank you Sarah) was, whatever else I did, to make sure I got off Manhattan Island. We spent about ten seconds on Staten Island as we disembarked from the ferry and got straight back on, but I'm not sure that really counts.... but as a result of that advice, we did make the effort to get out to Brooklyn, and after an unpromising start, had the best time of the days we were there.

The walk across the bridge is fantastic, of course... but instead of turning on our heels and coming straight back to enjoy the views of Manhattan again, we pushed on into Brooklyn. For an hour or so, things did not look at all promising. Once we'd got past the oasis of the Brooklyn Bridge Park, we found ourselves walking through an industrial desert alongside a nest of ring roads pushing on to the tunnels and bridges. We perservered, and then found ourselves in neighbourhood that seemed to consist of nothing but fried chicken outlets and places to get your hair braided in the senegalese style. New York is of course an incredibly multicultural city, but this was the first time in my wandering that I felt it would be a really, really bad idea to get the guidebook out for a look, as I was standing out more than enough already. We nearly gave up there and then, but we pushed on looking for a subway or something, and gradually the neighbourhood changed. The fried chicken shops gave way to halal groceries and then, slowly but surely, little boutiques and bistros began to appear. We were heading into Boerum Hill. Driven on by my bladder and the distinct lack of public toilets in the city, we popped into a nice looking French restaurant to have a drink and to make use of the facilities. The barman - Bart - was friendly, and he mixed a mean cocktail, so we hung around for a bit. We then started talking to some middle-aged ladies who were having a drink whilst waiting for the last member of their dinner party to arrive. One of the ladies had been reading about malt whisky and was keen to try some (Bart had a good selection, including Laphroig, Lagavulin, Glenmorangie and Glenlivet). We chatted about different malts, how to drink them, moved on to discuss port and finally onto why we'd come over to Brooklyn. They were all astonished that we'd walked all the way from Manhattan, as though it was a hundred miles away, but were all Brooklynites and were really keen that we make the most of our time over the East River.

I don't even really know how it happened, but before long, the maitre d' had got involved in the discussion, and they all agreed that we should go to a tiny little restaurant just around the corner that had just been voted the best pizza place in New York City - quite an accolade. We weren't even sure we were staying for dinner, but the maitre d' was persistent to the extent that he even rang them up and booked us a table..... he ran his own restaurant, but felt that if we only stayed in Brooklyn for one meal, then we should go to the pizza place. We stayed long enough to have another drink and to pick up recommendations on the best possible place to buy a bottle of wine to take to the (bring your own) restaurant, and then we went out to find this other restaurant. The pizza restaurant - Lucali - was amazing. It's tucked away in a residential area of Brooklyn, and consists of nothing much more than a front room with an open kitchen area with a wood-fired oven at the back. You don't get much of a choice: calzone or pizza. You choose from a list of about 5 ingredients, and that's it. No starters. No pudding. Just plain and simple pizza. We shared a calzone, stuffed with fresh basil and some delicious, light ricotta. It wasn't at all expensive, but it felt like we were being included in a great local secret - there were people waiting outside the door the whole time we were there. It was a lovely meal, but the thing that I will really remember about it is the kindness of the Brooklyn locals that we met in that first restaurant who had been so friendly and welcoming. The ladies at that first bar told me that the French restaurant - Jolie - was their favourite in Brooklyn. We didn't eat there, so I can't comment, but the people we met there were brilliant, and Bart makes a mean cocktail.... so if you are around Brooklyn, do go and see them and thank them for me.

I'm telling you, serendipity: it's the future.
Posted by swisslet at 23:47