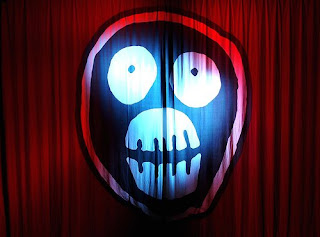 On Saturday night, we went to go and watch the Mighty Boosh Live.

I'd really been looking forward to this show, not least because I've had the tickets now for something like eleven and a half months, so I've had plenty of time to think about it. I think the Mighty Boosh are great: I love the surrealistic streak that runs right through the very heart of it, and although it is occasionally very disturbing (see the Crack Fox episode from the last series), it is very, very funny. It is with a heavy heart, therefore, that I must report that The Mighty Boosh has definitely jumped the shark.

The last Boosh live show (as released on DVD) was set around a definable plot that was then used as a device for introducing the various characters along the way. The setting, in a shop owned by Naboo and run by Vince and Howard, was strong enough that it was used throughout the third series. This show didn't bother with anything like that. Instead, we were treated to a series of "special guests", which enabled Fielding and Barratt to wheel on a series of characters without needing to trouble themselves with anything like a coherent narrative. Thus, as well as Vince and Howard, we were treated to turns by Bob Fossil, Naboo, Bollo, The Moon, Tony Harrison, the Hitcher and by the Crack Fox himself. It was entertaining, after a fashion, but it felt to me as though it fell between two stalls. It was neither new material, nor was it a retread of much loved older material.

When I went to see the Fast Show live, they wheeled out all of their characters and their catchphrases, but they at least took the trouble to put in a little groundwork beforehand, and they wrote new sketches in order to provide the character with the platform to perform, and to provide the audience with a bit of anticipation for the catchphrase that was sure to follow. The other option for staging a comedy show like this, which Mitchell & Webb used when I saw them live, was to take some of our favourite sketches from the TV show, and to reproduce them on the stage (in their case this was mixed with new material too). That's not as imaginative a way of staging a show, for sure, but is it that much different to going to a rock concert and watching a band perform songs you've heard before? If you went to see Monty Python, wouldn't you want to see them do the Dead Parrot sketch?

The Boosh decided that they weren't going to rehash old sketches, but unfortunately, neither did they bother to write any new material. Instead, they just wheeled characters out - literally in the case of Tony Harrison, and even then, far too much of the comedy came from the fact that Noel Fielding was in a chair with his head sticking out. Oh here's Naboo. Here's Bollo. Here's Bob Fossil. It's not enough to just present a character and expect us to laugh uproariously. Although we laughed, actually the characters in themselves aren't intrinsically funny, we're laughing at all the things that character has done in the past, not what they're doing now - and how long will that be funny? Anyone who was coming to the Boosh cold would have been completely baffled and no doubt wondered what the crowd was finding so hilarious.

The second half of the show had at least a semblance of structure, being based around a typically pompous Howard Moon play, but even that dragged on, and the show as a whole just struck me as unbelievably lazy. If they took more than about a day to write the whole thing, I would be very surprised.

The most amazing thing about this, and perhaps the reason that they did it, was that the audience let them get away with it. They did it because they could, and the audience lapped it up. They cheered, they screamed, they heckled, they dressed up as their favourite characters, they bought from the extensive range of merchandise available at several points throughout the Arena.... what they did not do was apply any kind critical filter to the dross that they were being served up.

Judging by the length of the tour, the size of the venues and the number of extra dates being added, I think Barratt and Fielding will be making an absolute packet out of this. Shame they didn't put a bit more effort into it.

...and judging by the extended music bit at the end, look out for a Mighty Boosh album some time soon. Just don't expect the songs to display the wit of Flight of the Conchords....("I did a shit on your mum" anyone?)

The evening - and some of the fans in attendance - was perhaps best summarised when the Hitcher came on just before the interval to come amongst the crowd and to sing "Eels". We were told this was the last thing before the interval, so a few people took the opportunity to get a headstart on the queues and they clambered over the whole row... with the show still going on remember .... to get out. Five minutes later ... with the show still going on ... they clambered back across the whole row with their beer and snacks. How ignorant is that? Pah! And don't get me started on the shrieking. It even seemed to annoy the cast after a while....
Posted by swisslet at 18:44