you have been gone too long....

One item of business before we launch into this week's earworms.....

It's now been exactly seven days since I first started actively cultivating a moustache to raise money and awareness for the Prostate Cancer Charity as part of "Movember".

Time for a progress update, I reckon: 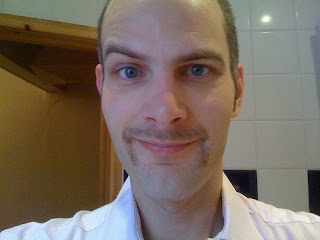 From the look on my face there, you'd think I was loving this.... and perhaps I am.... but I was about to leave the house for work and caught myself looking like such a miserable bastard that I had to force out a smile, and this was the end result. I look a bit mental, on the whole, I think.

Well, there's now no hiding the fact that I am growing a ridiculous looking moustache. It needs a bit more depth, perhaps, but as someone at work said to me this afternoon, the design is good and the basic concept is right... the rest will follow over the course of the month. I am now getting stared at on a fairly regular basis though. Apparently part of the point of the exercise is that, as well as the money, the charity gets loads and loads of awareness this month, as they reckon that every single person taking part will get asked several times a day why they are growing a moustache, and they will then explain. It's good, innit? Although, to be honest, I'm thinking of wearing a big t-shirt saying something along the lines of "It's not a LIFESTYLE STATEMENT. It's for CHARITY" or somesuch. For every person who asks me, I can't help but think of the ten who just assume I've decided to grow a moustache. That's the kind of thought that keeps me awake at night. 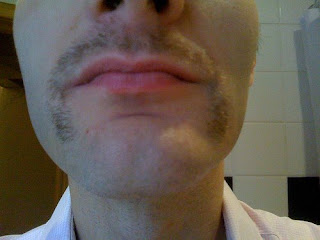 I've now raised well over £300, but I reckon with so much of the month still to go, and with plenty of scope for personal embarrassment still to come(I'm going to visit my parents on the last weekend of the month, for starters).... we can do better than that, can't we?

You can sponsor me here. Laugh by all means, but please consider a small donation as you do so.

All money raised goes to the Prostate Cancer Charity in the UK. Given that 1 in 11 men will be affected by prostate cancer in their lifetime, I think it's a worthy cause - certainly good enough to spend a month walking round looking like a divvy, anyway. If you like, think of any donation you make as pay it forwards.....

In many, many ways, this is nothing but annoying, derivative shit. It sounds like the bastard offspring of "Mr Blue Sky" and the worst kind of sub-Blur Britpop rubbish. Actually, that's exactly what this is.... and yet... and yet.... after a couple of listens, other stuff slowly starts to emerge from the detritus: there's hints of the urban delivery of The Streets and Jamie T in here, and behind that upbeat, bouncy melody, there's a rather more downbeat story about someone trying to live their life with one less plate at the table and it's beans on toast for tea. I'm still leaning towards this being irritating beyond measure, but it's managed to climb into my head, if nothing else. Ben - 5x5 stuff on the way this weekend if it kills me!

Dreadful song, but it was playing in the changing rooms at the gym, and my bastard brain did the rest. Thanks Brian.

This has always been my favourite Doors song, even if it does remind me of that dreadful joke / horror story that we always used to tell each other as kids, about the couple who run out of petrol on a stormy night. You know... the guy goes off to get fuel, and the girl stays in the car and waits. And waits. And waits. It's lashing it down with rain, but she starts to hear a tap-tap-tap on the car roof. Blah, blah, blah.... police come along, tell her to get out of the car and not look back, and it's a psycho on the roof of the car with her partner's severed head. Tap-tap-tap. Maybe that's exactly what Jim Morrison was hoping for?

No idea how this one crept in... but hey! Owen Paul is always welcome around here.

I quite like The Killers. I quite like them, but I don't love them. They've done a few good songs, a few I'm not that bothered by, and a couple of absolutely solid gold classics. They apparently wrote "Mr.Brightside" within 10 minutes of getting together as a group. If that's true, then in a way that must be really depressing, as I doubt they'll write another song that good if they're together for the next thirty years. It is a great song, at least, I suppose. This is another reasonably good song, and it's catchy and yet strangely lightweight, like a lot of the rest of their stuff. I do like the liberties they take with grammar though. Are you human, or are you dancer? Like it. My 'tache has been compared this week with that sported until recently by Brandon Flowers. I'm not sure that was meant as a compliment, but I'll take it.

Well, I'm off to see the Boosh tomorrow night... and I'm very much looking forward to it. I hope we get some crimping....

Wide-eyed indie pap with a big chorus and lots of "woo-hoos". They're not everyone's cup of tea, and to be honest, I'm not sure about the new album, but I love'em. They're still the only 10/10 gig I've reviewed here, and I've just bought tickets to see them in March. God love'em. Gary Lightbody still has that "Celt" sticker on his guitar, although I can't help but notice that it's now on a Les Paul.....

My favourite song of hers. She's only a tiny little thing, but during the course of this song, she manages to conjure up a vivid picture of a nightmare, but also to convince that she could be your protector. Bless.

Of the three gigs I attended this week, this one was my favourite. All three of them were pretty good, but this one stood out for me. If I may plagiarise Mike again, it's something to do with the way that they managed to not only recreate the beauty of their record, but to do so with all the muscle of a proper live band. Really, really good. Before the gig, I liked the whole album, but I only really had ears for "White Winter Hymnal". Since the gig, I'm discovering just how good the rest of it is too. Robin Pecknold claimed to be a bit embarrassed by "Your Protector" to, but that's another cracker that could easily have made this list.

Right. That'll do then. Don't forget that I'll be closing the shuffleathon on Sunday, so if you want to take part, you'd best get in touch before then.