It's MS Week from 27th April to 3rd May. It's an opportunity to try and raise awareness about a condition that affects some 85,000 people in this country, including me. As I said the other day, it's a condition that most people have heard of, but one that not many people know very much about, and a big objective for this week is to try and dispel some of the misconceptions that people have.

I've been in two minds about doing this, but I've decided that I'm going to dedicate the whole of this week to some of the material being produced for this campaign by the MS Society. If there's one thing I desperately want to avoid, it's to allow myself to become defined by my illness, and how can I seriously expect other people to see past it when I keep talking about it all the time myself? I've only been recently diagnosed with multiple sclerosis, but I've been suffering from the symptoms and going through the process of being diagnosed since August 2005. In that time, although I've tried not to go on about it too much here, it has been (all too literally) very much on my mind, albeit often in the form of background noise. It was an ever-present and most unwelcome undercurrent to every day. Since early-March this year, when my neurologist decided that I should be formally diagnosed with multiple sclerosis, things have picked up speed, and I've been attending clinics, meeting MS Nurses, booking myself in for a lumbar puncture and choosing which drug I'm going to be injecting myself with every week for the foreseeable future. I've chosen to be honest and open about all of that here, probably ensuring in the process that people increasingly see me, and perhaps I even see myself, as being more about the multiple sclerosis and less about the earworms and music and exercise and my brilliant career and all sorts of other random nonsense that are also part of my makeup and have been for a lot longer....

It's a tough one, and I was already beginning to wonder if perhaps I should write about the WTs less and other things more. But you know what? To hell with that. I'm going to continue to write about whatever takes my fancy, and right now (and without wanting to sound like I'm on X-Factor or something), I'm on this ridiculous journey and I'm going to write about that. In doing so, I find that it's helping me to work things out in my own head (oh, if only that were literally true....) and I hope it might also help some of you to become more aware of this horribly common neurological disorder and how it can affect people.

As the old adage goes, I might have MS, but MS doesn't have me. I'm not going to NOT write about it because I'm worried about what people might think of it and of me. Isn't that exactly the kind of thing that MS Week is trying to change? I think it is, and so over the next few days, I'm going to write about pretty much nothing else but MS, and to hell with what people think.

First up is a face familiar to many football fans: Danny Wallace: 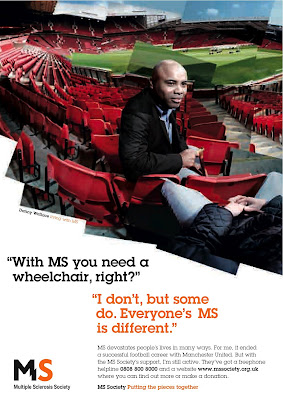 Danny was in his 20’s and at the top of his game playing professional football for Manchester United when he first starting experiencing symptoms that would eventually lead to a diagnosis of MS.

He was unable to bounce back from injury and was spending an increasing amount of time in the treatment rooms.

“At first I thought it was the usual injuries that all professional footballers got, but after a while things didn’t seem right,” he explains.

The turning point for Danny was in 1993 when he signed for Birmingham City. He began to feel pins and needles in his legs and feet and would feel incredibly tired after games. It was the smaller symptoms of the condition that had a major effect on his every day life.

“I would get frustrated that my feet were numb or I had pins and needles in my legs, I just wanted to play football. I couldn’t understand what the problem was.”

After deciding to retire from professional football in 1995, Danny went to speak to a financial advisor about his pension. He was sent for medical tests which diagnosed him with having multiple sclerosis - a condition of the central nervous system which causes the body’s immune system to attack myelin, a substance surrounding nerve fibres, causing confusion and delay in messages from the brain and spine.

Now, almost 12 years since his diagnosis, Danny, age 45, has stepped forward to be one of the faces in the MS Society’s new campaign to raise awareness of the condition.

“Since being diagnosed I’ve spent much of my time raising money for others affected by MS and I was happy to take part in the campaign. It’s important to help others understand what the condition is,” he said.

“When I was first diagnosed I kept my condition quiet and only told close family and friends. I found it embarrassing and I couldn’t come to terms with it. Five years after my diagnosis I was able to come out and tell people.”

Unfortunately for Danny, his MS stopped his career as a professional footballer reaching its full potential.

“I would have definitely got more opportunities had I been fit while I was at Manchester United – I couldn’t play as many games as I wanted to and that had a negative affect on my career for sure.”

Now Danny is retired he helps raise money and awareness for MS, along with looking after the family home and his children. His symptoms include fatigue, pins and needles in his legs, problems with walking and regular back spasms, especially in the morning.

“I take regular medication, which helps, but walking is always a problem. I’ve even been out with friends in a social situation and people have presumed I was drunk. I might have had a few drinks but I certainly wasn’t drunk. It made me feel disappointed in people – that they could just presume that that’s the case, but I suppose they weren’t to know.”

Spread the word. More like this tomorrow.
Posted by swisslet at 00:31