It's MS Week - a chance for the MS Society to get loud about multiple sclerosis, raising awareness of it by reaching out to people who don't know much about it. I've got MS, and I've decided that every post this week is going to be dedicated to talking about this nasty little sod.

I had a stark reminder yesterday of how much my condition affects the people around me. In some ways, I'm the lucky one: I know exactly how I feel at any given time, and although I may not like it, and although I may be worried about what's going to happen in the future, happy or sad, I know how I am within myself. My friends and family do not have that luxury. They're concerned about me, of course, and they may be very well-informed about MS, but they simply cannot know how I am feeling. I was chatting away to my mum on the phone last night, and as well as hearing the happy news that my elder brother has found himself another job, my mum was naturally keen to know how I'd got on with the MS Nurse a week or so ago and at the Disease Modifying Drugs clinic the other day. I was merrily filling her in with the details of which drug I'd chosen, how I needed to go for a lumbar puncture and an evoked potentials test, and all that jazz, when my mum burst into tears and told me how sorry she was.

She's my mum, so it's only natural that she should be upset on my behalf, but I was still a tiny bit taken aback. For me this MS is what it is; I have it and there's not a damn thing that can be done about that now. For my mum though, even though she was a nurse and she's been married to a doctor for the best part of 40 years, so between them they probably know more than most about the condition, it must still feel a little like the world is falling around the head of one of her children, and she's upset on my behalf. It doesn't feel like that for me, but I have a very analytical and rational brain and an emotional response to something I can't do anything about seems to me like a waste of energy that could be better channeled into simply trying to get on with my life.

Although there seems to be some sort of a genetic component to it, MS is not a hereditary disease. Even if it was, it's still nobody's fault, and the last thing I'm going to be doing is running around pointing the finger of blame at my parents.

Which brings me to this evening's material from the MS Society. This one's a heartbreaker. Think that only adults get MS? Think again. 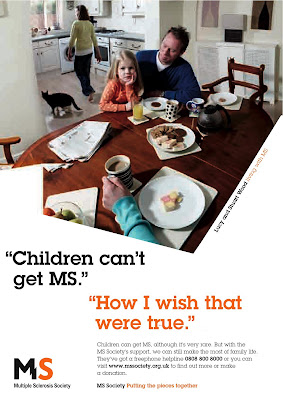 With two cases of multiple sclerosis (MS) in the family, the Woods contacted the MS Society and said they wanted to help raise awareness of the condition.

The family are keen to show that MS can affect children as well as adults and have been chosen to take part in the MS Society’s latest advertising campaign to raise awareness of the condition. Here they share their story of living with MS.

Stuart was 27 and playing a game of competitive Sunday morning football when his team mates asked if he was drunk.

He’d been experiencing unusual symptoms – like pins and needles and a loss of sensation in parts of his body – but he chose to ignore them. When his vision in his left eye became blurred, and then went completely, he decided it was time to visit his doctors.

“I was put on a drip and my eyesight came back but a few months later my sight went in my other eye,” he explains. “I was slurring my words and things weren’t right but a diagnosis seemed to take what felt like forever.”

He started to investigate possible causes on the internet and so when doctors told him he had MS, he wasn’t too surprised. He explains: “When the doctors told me I had MS I was in pain with my symptoms and I immediately thought I’d spend the rest of my life in a wheelchair – but it hasn’t been like that and I’m glad.”

Stuart now wears a brace on his right foot and his right hand is constantly numb but he takes regular medication which helps. He works full time as an estate manager – a job that he really enjoys. He said: “People always ask me why I work full time but I couldn’t never just pack it in because I have MS – it would be like I was giving up. Quite a few people went for my job but I got it, I couldn’t believe it, it goes to show MS doesn’t stop you achieving what you want.”

Throughout Stuart’s condition he never thought that his symptoms would be replicated in his daughter. “When Lucy was diagnosed with MS I blamed myself and I still find it hard. I’m not an emotional person but I completely broke down when Sharon and I were told. It’s still hard to understand but we’re gradually learning to deal with it.”

Lucy was 3 when she started experiencing symptoms that would eventually lead to her diagnosis of MS. She developed conjunctivitis in her left eye and despite the drops was soon commenting that her vision was “all dark”.

The family visited the opticians who discovered swelling at the back of her eye. Doctors initially thought the cause was a tumour but referred Lucy for more tests which identified a possible diagnosis of ADEM – a neurological condition similar to MS but found more commonly in children.

Lucy reacted well to steroids, but over the next few months her health would fluctuate – from having no vision in her right eye to taking much longer than other children to recover from a water infection and finally collapsing at school with a suspected stroke.

Her mother Sharon explains, “It was a difficult time for us; like having a black cloud over our heads and trying to see our way in the dark – we just didn’t know what was going on and we just wanted Lucy to be ok.”

In August 2008, after several symptom-free months, Lucy collapsed on the kitchen floor at the family’s home after celebrating her 5th birthday. She was admitted to hospital and Sharon and Stuart began having thoughts that her symptoms could be related to MS. Tests identified lesions on her brain and doctors confirmed Sharon and Stuart’s suspicions.

“It was like being in a car crash,” explains Stuart. “It was just so difficult to hear. The only advantage was that we knew what MS was and what her symptoms might be. We could deal with the condition better than if we’d only just heard of it.”

Lucy’s condition now is fairly stable and her teachers report she’s doing well at school but struggles a little with fatigue and walking long distances.

The family remain positive about their futures and have found much support from the MS Society and other families in a similar situation. “Knowing Lucy has MS is never going to be easy but we’re slowly learning to accept it,” Sharon explains. “Stuart blamed himself at first, but we can’t look at the situation like that. We’ve received a lot of support from other families in our situation and that helps.”
Posted by swisslet at 19:33