skip a beat and move with my body....

It's MS Week - a chance for the MS Society to get loud about multiple sclerosis, raising awareness of it by reaching out to people who don't know much about it. I've got MS, and I'm spending all this week talking about the condition and trying to get a bit of exposure to the Society's campaign.

I exercise quite a lot: 6 days out of 7 on most weeks, and more often than not, every single day. I don't run marathons or anything, but I swim a couple of times a week, run in excess of ten miles (in 4 mile chunks, mainly) and I play football once or twice a week. Let's be absolutely clear about one thing: I don't really enjoy taking exercise. I enjoy having done exercise, and I feel fat and lazy if I don't exercise, but it's only on the very rare occasion that I would really, honestly be able to say that I had enjoyed a run. The reason I take so much exercise is for purely defensive reasons: I like my food and I like a drink or two. If I didn't exercise, then I would face the stark choice of either watching what I ate, or simply getting fatter. I choose exercise and eat more or less what I want. There was a time, when I was in my twenties, when I was about five or six stone heavier and was doing very little exercise. I've seen the photos, and I don't want to go back there. Improved diet, exercise and - most importantly - a nasty bout of bacterial food poisoning, soon put paid to that excess weight, and I'm now pretty skinny... but the face that stares back at me from the mirror is not the face of the thin person, and I don't think it ever will be.

The reason I mention this is because, over the last few months, I have found taking exercise to be increasingly difficult. My symptoms started, in August 2005, with a numb hand. That numbness soon spread across my body and down my legs, and in the end I was forced to drop out of the London Triathlon (1500m swim, 40km cycle, 10km run) that I had been training so hard to compete in. My name is on the 2005 event t-shirt, but I was forced to watch as a spectator. I kept running, and soon I began to get used to the loss of sensation and was almost able to put it out of my mind. As time went on though, and as the months turned into years, I began to notice that things were getting harder. The progression of multiple sclerosis is measured by most sufferers by the onset of the relapses that signal the development of another lesion on their central nervous system and a whole new batch of symptoms. I can't honestly say that I have noticed a particularly momentous event that triggers a new set of symptoms, but I have noticed that the symptoms that I already experience have been getting steadily worse for some time, and the little things that I take for granted have been getting harder. I still run, I still swim and I still play football, but all of these things are becoming more difficult. I am slowing down, my balance is starting to go and I'm losing the feeling in my legs and the strength in my arms and shoulders. Only about 20% of MS sufferers actually end up in a wheelchair, and I don't like to dwell on possible futures, but I'd be lying to you if I was to say that I wasn't a little bit worried about where this progression is going to end up.

With those kind of thoughts at the forefront of my mind, I didn't need very much encouragement to come round to the view that starting on a course of disease modifying drugs, to be injected every week into my thigh, was probably a good idea. There's reasonable evidence that starting on beta-interferon will help to slow down the onset of the disease and the progression of my disability. There are some side-effects, but this was good enough for me. My family are worried that I do too much, but I won't feel like MS has really affected my life until it really stops me exercising. Until that time, and no matter how slowly I might have to do it, I'm going to continue running, continue swimming and continue playing football. It's going to take more than an incurable, progressive neurological disease to stop me.

In fact, you know what? If they'll have me, I'm thinking of donning an orange vest and - together with C - running the Robin Hood Half Marathon in September this year to raise money for the MS Society. If we did, would you consider sponsoring us? 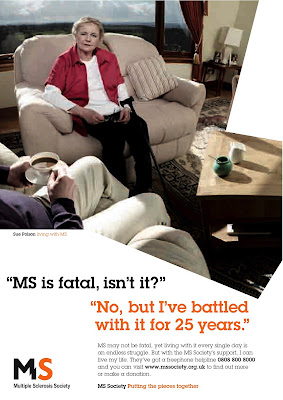 Sue experienced her first symptoms of MS when she was hurriedly planting bulbs in her garden.


“I remember coming inside as it had just started to rain, I was rushing around and my foot went numb. I thought it was odd, but over the next 24 hours the numbness gradually made its way up my leg. I was frustrated – I didn’t have time to be ill, I had a busy job and busy lifestyle and didn’t want to be off work.”

Much to Sue’s dismay, the numbness did not leave and after a trip to the doctor she was rushed straight to hospital with a presumed damaged spine or a possible stroke.

“I had an MRI and a lumbar puncture, which I found to be a most painful procedure, but nothing was confirmed. I felt so useless being in hospital I started helping the nurses make the beds!”

Doctors told Sue she would experience problems with her leg for the next few months, but that she shouldn’t worry too much.

She put the experience behind her and began a new job, but eight months after leaving hospital the numbness in her leg returned. Doctors confirmed almost immediately that Sue had multiple sclerosis – a condition of the central nervous system which causes the body’s immune system to attack myelin, a substance surrounding nerve fibres, causing confusion and delay in messages from the brain and spine.

Now Sue, age 59 from Dunfermline, has been chosen as one of the faces to front the MS Society’s national campaign to raise awareness of the condition.

“The MS Society has provided me with so much hope and support over the years that I was only too happy to oblige. I’m representing the older members of society with the condition – and that’s fine by me!”

For the first two years of her diagnosis Sue’s MS symptoms were very aggressive. A year into her diagnosis she had to leave work, something she found terribly hard, and she was in and out of hospital around four times a year. In 2000 she lost the use of her legs and spent much time in rehabilitation learning firstly to stand and then to walk again.

“I felt frustrated that there seemed to be very little support available. If I couldn’t work I needed to do something to keep my brain active so I joined the MS Society and successfully helped campaign for access to disease modifying drugs. I signed up to the Society’s Research Network which has helped me a great deal in understanding the condition and has kept me busy over the years.”

Taking regular medication since 2000, Sue’s condition has stabilised and she has not been admitted to hospital for over eight years.

“I experience problems with mobility and use a wheelchair regularly, but I manage to walk some distances. My husband and I have moved to a bungalow now which helps a great deal. With his support and lots of good will, I can manage one way or another to achieve most of the things I want to do.”

“The biggest misconception I find in the MS community is that people think nothing is being done to help find a cure. Millions of pounds are being spent every year on MS research, and we are closer now to finding effective treatments than we’ve ever been before – something that will give many people hope."
Posted by swisslet at 22:18