the future is unwritten....

It's MS Week from 27th April to 3rd May. It's an opportunity to try and raise awareness about a condition that affects some 85,000 people in this country, including me.... so I'm spending all week talking about it. Alright?

I've tried really hard to be positive about my condition. Even before I knew it was multiple sclerosis, when it was still an undiagnosed condition with an unknown prognosis that a friend of mine decided should be called the Weirdy Tingles - the WTs - I've tried not to dwell on what this might be and what it might mean for my future. Perhaps it's a form of self-defence, but I'm a very analytical person and, faced with something like this, I've reverted to type and have steadfastly refused to have an emotional reaction. I know it sometimes sounds like ludicrous stoicism, but I genuinely do not see the point in reacting to something that it is totally outside my control. Whatever I have, however it is going to develop, and whatever it is going to do to me.... what the hell can I do about it? Yes, it is frustrating. Yes, I do worry about what is going to happen and how I'm going to feel tomorrow, next week, next year..... but what would be the point of crying over it?

I am human though, and it is simply impossible not to wonder what my future holds. No matter how rational and analytical I am, I can't stop my mind from wandering. Do you know what worries me? The thought that I might start to lose the use of my legs; that I might have my mobility seriously impaired; that I might be unable to rely on my already weakened arms and shoulders to bear my weight on crutches or to push a wheelchair; that I might end up immobile and unable to take any meaningful exercise.... MS can take away all sorts of things: your eyesight, your sexual function, your ability to think straight... but I'm worried about my mobility, and with every stumble and every fall I take, I worry about it all the more.

But really, even if that is to be my future - and it's far from certain - there's not a damn thing I can do about that now.

Not a damn thing.

I'm not sure that makes it any easier to cope with, but why worry about it? 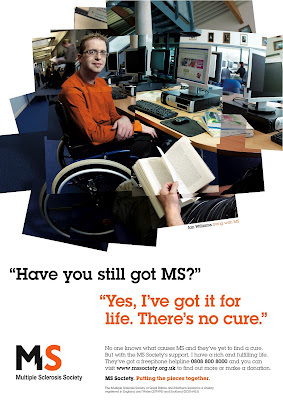 Ian had been experiencing a variety of unexplained symptoms for around two years, including a loss of sensation in his legs, difficulties with his balance and an inability to co-ordinate his movements, but when he started experiencing blurred vision in his left eye he decided a trip to the doctors was necessary.

He didn’t know what the symptoms meant, and had certainly never heard of multiple sclerosis (MS), but he thought they must be related to a chemical he was working with in his role as an injection moulding operator at a local factory.

Ian went for tests and an MRI showed lesions on his brain; doctors confirmed he had MS - a condition of the central nervous system which causes the body’s immune system to attack myelin, a substance surrounding nerve fibres, causing confusion and delay in messages from the brain and spine.

At the time his diagnosis Ian was 27 and married with two young sons. He’d never heard of the condition but was instantly distressed – presuming it was a serious life-shortening condition.

“I had a complete lack of understanding; I thought my time was up, but of course, it hasn’t been like that at all,” explains Ian.

Now, almost 10 years after his diagnosis, Ian, age 36 from Wales, has been chosen as one of the faces of the MS Society’s new advertising campaign to raise awareness of the condition and its symptoms.

Ian mainly experiences mobility problems and uses a wheelchair much of the time. He made the decision to leave work in 2004 after a series of relapses, bought on by stress, lead him into a spiralling depression. Since then, with access to the right treatments, he has managed to lead a happy, active and independent lifestyle.

“After leaving work I wanted to do something positive, so I went along to my local branch which had just started a drop in. It was great and really opened my eyes to what support was available. I started taking part in disabled sport and now I’m studying holistic therapies at college with the aim of working in reflexology,” explains Ian.

Ian was only too pleased when he was asked to take part in the MS Society’s advertising campaign. He says, “My motto is that ‘I have MS but it doesn’t have me’ – it sounds cheesy I know, but there are many positives to come out of a diagnosis. Media coverage can be negative and that’s scary for people newly diagnosed. I hope my story will show people that MS can be a catalyst for new opportunities and that life doesn’t have to stop when MS starts.”
Posted by swisslet at 20:04