what difference does it make?

In case you hadn't got the gist by now, or if you're just passing through, It's MS Week - a chance for the MS Society to get loud about multiple sclerosis, raising awareness of it by reaching out to people who don't know much about it. I've got MS, and I've been talking about it all week. Well, and before that too, and most likely after...but definitely during the week. Anyway. You get the general idea, I'm sure.

After diagnosis, the MS Nurses at QMC became the epicentre of my medical world. They, and not my GP or my neurologist, will be the first people that I should contact about anything to do with my condition; they will be the ones who organise my appointments, arrange my treatment schedule, teach me how to inject myself correctly and generally make sure that I'm okay. The very first thing that happened to me after my neurologist decided to make a diagnosis was that an appointment was made to attend the hospital's MS clinic and to meet an MS Nurse for the first time. As well as talking me through the various treatment options and showing me the various bits of apparatus that come with each one, she gave me a whole pile of literature about the condition. When I attended the Disease Modifying Drug clinic a week later, one of the other MS Nurses helped me select a whole load more. There are all kinds of leaflets: ones that help you understand the drugs you are asked to choose between; ones that help you understand the basics of the condition; ones designed specifically for carers; ones that tell you about the pain associated with MS and the various pain management options available.... all kinds of stuff. There's a whole lot more of this kind of information also freely available on the MS Society website, as well as a whole community on the forums there waiting to offer advice and support. Being diagnosed with MS could potentially have been overwhelming, but the support on offer from the NHS and from the MS Society has been really helpful (I actually emailed the society the other day with a very specific question about the drug I am planning to take, and they mailed me back a couple of days later with a very detailed and specific answer from their researchers... they're a fantastic resource).

In one of the leaflets, there's a section on who you should tell about your diagnosis. Of course, there's no right answer to this question, but it offers up a few things that you should consider. It's an interesting question, and one that has been very much on my mind. Of course, I know that - theoretically speaking - I've already told the whole world about it here.... but although a good number of people I know, friends, family and colleagues alike, occasionally stop by, they're still very much in the minority. My mum and dad know, of course, and I imagine that my two brothers and other family members have heard. I've not specifically mentioned it to my friends, although word has got around and I've had lots of supportive phonecalls and emails and things. Work colleagues are another kettle of fish though. Some of the more interesting sections in the MS Society literature deal with the question of whether or not you need to tell the people you work with. There's no legal obligation, but there are lots of different things to think about: is it something that it might be helpful for a few people there to know? What will I gain by telling them? What will they gain by knowing? I've told a couple of my closest colleagues, and a few other people have probably worked it out on the basis of the various hospital appointments and clinics they know I've attended over the last two years. But everyone else? My condition is not really a secret, but do I really want to advertise the fact to everyone and to take all of the baggage that might come with that?

I need to make up my mind soon. As part of MS Week, it's the MS Society Cake Bake tomorrow. As I'm sure you can guess, the idea of this is to bake some cakes and then sell them to raise some money (and awareness) for the MS Society. C. is a keen baker, and she's got the fundraising pack containing some balloons and a collection box, and she's busily baking so that she can take a whole pile of home baked goodness into the office tomorrow to raise some money. She's going to give me a cake too so that I can do the same. It's brilliant, but it begs the question of whether I should tell people in the office what it's all in aid of, and why we're so personally interested in the cause. I don't have to, obviously, but I think I'm going to. It's not a secret and it's not something I'm ashamed of. Why should I hide it?

I face a similar decision around the half-marathon too. The MS Society are going to send us a fund raising pack and the famous orange running vests, and I'm planning to set up a Just Giving page so that the two of us can raise money for the charity together. Together with a picture of the pair of us in the Society's running vests on the homepage, should I also say on that page why we're doing what we're doing? I don't have to, but I think I want to. It's an act that will probably have consequences in the way that people see me, but then again, why hide it? You never know - it might even help a few people to understand multiple sclerosis a bit better too. 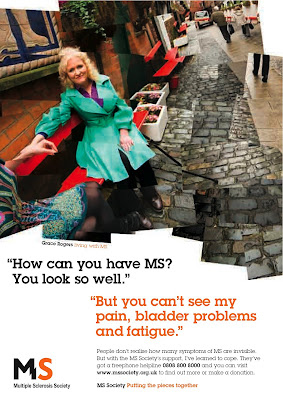 When Grace Rodgers couldn’t feel the clothes on her body she decided something was wrong and she needed to visit her doctor.

For weeks, she has been experiencing numbness in her hands and feet and a loss of sensation right across her body. Her vision in her left eye was blurred and problematic and gave her cause for concern.

“I visited the doctors and went for some tests but they were unwilling to confirm anything right away. A few months later, whilst I was cooking dinner my eyesight went completely. It was a Sunday night, so on the Monday morning I went back to the doctors and they admitted me to hospital where I stayed in for further tests.”

Only 5 months previously Grace’s sister had died of a stroke and Grace had obvious concern that it was something just as worrying. “When they told me I had MS I felt relieved, at least I knew what it was and I’d be able to continue my life.”

Grace was 37 years old, married with three teenage sons when she received the news she had multiple sclerosis – a condition of the central nervous system which causes the body’s immune system to attack myelin, a substance surrounding nerve fibres, causing confusion and delay in messages from the brain and spine.

Now, Grace, age 48 from Belfast, has been chosen as one of the faces for a national campaign to raise awareness of the condition.

“I’m excited to take part in the advert and I’m willing to share my story to help others. For me, taking medical retirement at 37 years of age wasn’t great and my life has gone in a different direction to what I expected, but it’s not the end of the world,” Grace explains.

“I now volunteer a few days a week in the MS Society’s offices in Northern Ireland and it’s something I really enjoy.”

11 years after her diagnosis, Grace mainly experiences problems with her mobility. “I can’t walk far and use a stick almost constantly. If I’m going out I’ll use my scooter and we’ve just had the car adapted so I can drive using hand controls instead of relying on my feet and thankfully, although I still have optic nerve damage, my eyesight has returned to almost normal – I want to remain as independent as possible.”

She explains that the majority of people she meets view MS as a very negative condition. “It annoys me that so many people think you’ll automatically end up using a wheelchair all the time and that the condition will progress rapidly. I might get by using a mixture of my stick and scooter for the rest of my life – none of us know how things will turn out but you must remain positive.”
Posted by swisslet at 19:41