And so MS Week draws to a close. Well, at least it does around here. It's technically still going on until 3rd May, but this is going to be my final word on the subject. C. had a massive baking session last night and she made madeleines, chocolate brownies, chocolate chip cookies, oatmeal cookies and - the pièce de résistance - a huge baked New York cheesecake. She took them into work this morning as part of the MS Society's Cake Break event, and between the two of us, we raised £68.26..... C. herself sadly didn't get to sample any of her cheesecake, but I did, and it was splendid. In the event, no one actually came and asked me about directly about MS, but it was noticeable that someone who works near me caught sight of the distinctive MS Society balloons and was round like a shot to find out what was going on. It's a condition that affects an estimated 85,000 people in the UK, which doesn't really sound like a lot, but it's probably enough to mean that you are likely to know someone whose life has been touched by the disease. Take my office: as well as the lady who made a beeline for the balloons this morning, within spitting distance of my desk are a colleague who started experiencing symptoms about the same time as me but was diagnosed with MS a lot quicker, and just next to her is another colleague whose husband started injecting himself with Beta-Interferon at about the same time. There are a lot of us about.

I was really in two minds about dedicating the whole of this week to talking about MS, but I'm really glad that I did. Until this week, I wasn't really aware of how much difference the diagnosis has made to my mental attitude. I first started experiencing symptoms in 2005, and although I did my level best to cope with the uncertainty, it's only now that I realise how knowing that I have MS has enabled me to look forwards. As Queenie pointed out, knowledge is power. MS affects everyone differently, and so no one can predict how it's going to affect me in the future, but at least I now have access to a world of advice and treatment and support that was not available to me before. This is a very good thing. MS is a shit disease, and I wish that I didn't have it..... but I do have it, and there's nothing that anyone can say or do that will change that. What choice do I have but to face forwards and make the best of things?

I would say that I faced an uncertain future, but don't we all? 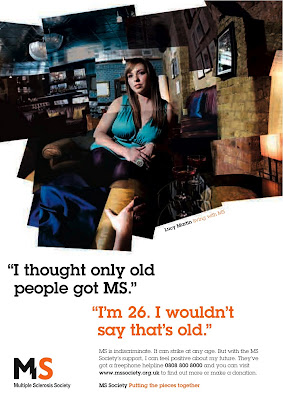 Waking up after her 25th birthday celebrations Lucy found she had pins and needles down the left side of her body.


She’d been experiencing strange, unexplained symptoms for a number of years but thought nothing of them. A keen horse rider, her back had given way while she was out on her horse only a few months previously, but now, lying in bed with no explanation as to why her left side was tingling she realised that this was the most unusual, and alarming, sign yet.

Her immediate reaction was to ignore the symptom – she thought it would leave and that it was the effects of exhausting birthday celebrations, but symptoms persisted and she soon made an appointment with her doctor.

She was sent for further tests but initial reactions from specialists were that she had experienced a minor stroke or had a trapped nerve. When she was diagnosed with multiple sclerosis (MS), Lucy says it was a complete bombshell.

She says: “I felt gutted. Who wants to be diagnosed with MS at 25 years old? I wasn’t aware of the condition or its affects but at the time everything seemed negative and scary. Over time I have learnt to deal with the news and I’m almost blaze about it now – I know there’s not a lot I can do, but I must remain positive and continue life as normal as possible.”

Now, just one year after receiving her diagnosis, Lucy, age 26 from Warwick, has been chosen as one of the faces for the MS Society’s new advertising campaign aimed at raising awareness of the condition and the charity.

MS is a condition of the central nervous system which causes the body’s immune system to attack myelin, a substance surrounding nerve fibres, causing confusion and delay in messages from the brain and spine.

The condition can cause a variety of symptoms including loss of balance and mobility, extreme fatigue, depression and mood swings. There is currently no cure and few effective treatments, but with the right support and information people can continue their lives.

Lucy mostly experiences vision and sensory problems and only recently regained the feeling in her hands – a symptom which previously meant she would place them in scolding water or on hot oven dishes without realising. She often feels pins and needles down one side of her face and experiences mood swings, but mostly manages symptoms well.

This year Lucy is due to marry her long term boyfriend, Tom, who, along with her family, has been a great source of support, strength and stability throughout Lucy’s diagnosis and the first year of her condition.

“Tom proposed while I was having tests for MS. It was a scary time for us but it meant a lot to me to know that he was prepared for the diagnosis outcome – regardless of what it was.”

Lucy is now studying for a Masters and felt pleased when she was told she’d been selected to appear in the MS Society’s adverts. She says: “People always tell me ‘I look so well’ – I think they expect people with MS not to lead a normal life. By taking part in the adverts I want more people to know about MS and show that although I can’t predict the future and things might not be so good, I’m not ashamed to have it.”
---

Well there we have it. Normal service will be resumed shortly. I hope that this week hasn't been too boring for everyone..... I'd say that I won't be writing about the WTs for a little while, but with a spinal tap, an evoked potentials test and the start of my treatment, I think they'll be back here sooner rather than later. Well, that is unfortunately my life.

Have a great long Bank Holiday weekend y'all.

Earworms will be back next Friday with Lisa Rullsenberg in the hotseat. Should be good.

Thanks for your support everyone.
Posted by swisslet at 20:31