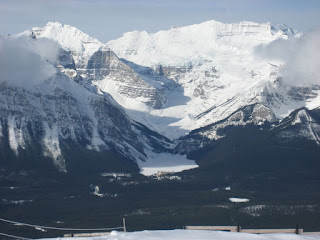 Hello. Sadly, I have to report that we are now back from Canada.

What a country, eh? Beautiful scenery, the friendliest locals, stunning wildlife (as well as the elk, moose, caribou, long-horned mountain sheep, mountain goats and the like that we actually saw, we saw lynx tracks and heard some great stories about the Banff wolf pack and about a 200lb cougar called Doug. Oh, and we saw a Grizzly bear just emerging from hibernation). We ate magnificent steaks (on what seemed like a twice daily basis - I think I've currently got the shakes because of my withdrawal symptoms from all that Alberta beef); we drank decent beer (Molson Canadian was alright, but I was more taken by Molson's Rickard's Honey Brown Ale, and by several beers from smaller breweries Big Rock Traditional Ale, Keith's Pale Ale, Grizzly Paw Pilsner and Grumpy Bear Honey Wheat); we marvelled at the seemingly endless ice hockey on the telly and at how all of the radio stations seem to be stuck in a 1980s time warp..... oh, and we did some skiing too. 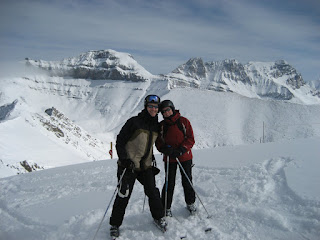 We skiied 8 days out of 9 in the end: our ski pass enabled us to pick up the shuttle bus outside our hotel to Norquay, Sunshine Village, Lake Louise, but we also took a trip out on our last day to try out Kicking Horse in British Columbia. It's quite late in the season by European standards, but the season in Canada stretches into May, and we enjoyed some pretty good conditions, with lots of powder still to be found, especially in the back bowls at Lake Louise and on the top at Sunshine. Skiing in Canada is different to skiing in Europe. In the Alps, the majority of the runs are well above the treeline and the resorts themselves are heavily exploited and developed. In Canada, skiing is still very much an off-season activity, and some of the resorts are based in National Parks, so the slopes are much, much quieter, and the development is much less intrusive. It's a proper wilderness here, and it's not at all uncommon to see more squirrels than people on the piste, and we saw lynx tracks underneath the ski lifts and at the Wolverine Quad chair in Sunshine, there was a sign warning skiiers that a cougar had been sighted in the area..... you don't get that in Val D'Isere, that's for sure. The runs themselves are long and tree-lined, and the plan of the resorts is much more open-plan than in Europe, with far less of a concept of piste and off-piste skiing. At Kicking Horse, for example, it is possible to easily ski around between marked runs and to make your own way through the trees and down through the gullies and cornices. It's brilliant.

Even in April though, it can still get pretty damn cold on the slopes, and any exposed flesh soon starts to burn.... we just missed out on a cold snap that sent temperatures (before wind-chill) down to about -30C, but it was still -10C and colder. The Canadians laughed at all these soft Europeans moaning about the cold, but wrapping up warm was very much the order of the day. 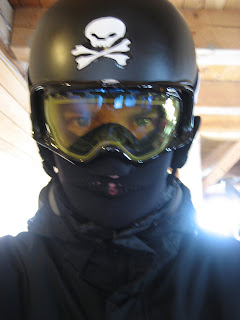 ...although I'm not sure that it's really necessary to look quite as much like a Mighty Morphing Power Ranger on the piste. 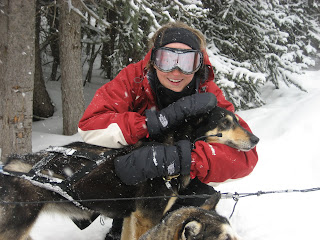 It wasn't all about the skiing though, and we did take the opportunity to go out to Spray Lake to spend a couple of very happy hours dog sledding. C. and I had a sledge and six huskys all to ourselves and although I'm pretty sure they knew the way, it was a real thrill to be in command of a team of dogs running though the snow in such a beautiful environment. 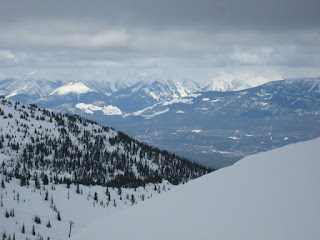 And Canada is a beautiful country. Calgary isn't much to look at, sure, but as you get out into the Banff National Park itself (now that's an unfortunate acronym to see on bumper stickers....) the scenery becomes simply stunning. It's a 40 minute bus ride from Banff to Lake Louise, but I can honestly say that it was a real highlight every time: the route runs along the Trans-Canada highway, and goes past Castle Mountain, with the forest hugging the side of the road and the possibility of wildlife sightings all the way. Unlike the French Alps, there's not a concrete appartment building to be seen anywhere. Such buildings as there are seem to all have been sensitively built from timber. 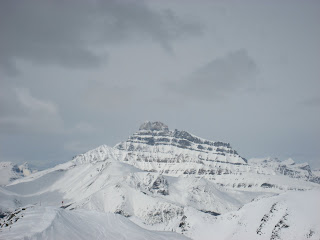 They've even got a mountain that looks a bit like Snoopy asleep on the top of his kennel. 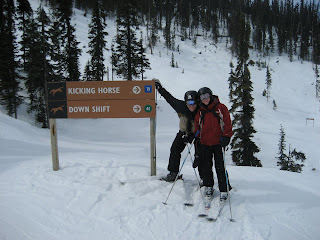 I'm more than a little sorry to be home at the moment. It's mild and green and spring-like in Nottingham at the moment, but I'm missing the Rockies.

We had a lovely time and I definitely want to go back in the summer sometime soon.

Oh. Quick question for you: who would you say is the most famous Canadian? I maintained that if you asked a Canadian, lots of them would say Wayne Gretzky, but none of my companions seemed to know who he was and felt that people would say Celine Dion or Bryan Adams or somebody. After consultation with our waitress one night, we settled on MacGyver (although I'm not convinced that he's Canadian, and Richard Dean Anderson is an American). It's a bit like the famous Belgians game, this..... with lots of famous Americans actually turning out to be Canadian: William Shatner, Jim Carrey, Mike Myers, Pamela Anderson, Keanu Reeves, Neil Young, Leonard Cohen, Alanis Morissette, Bryan Adams, Joni Mitchell, Sealion, Avril Lavigne.... For me (and for most of the Canadians I asked) it was still the Great One though.....

Great holiday. I'll try not to go on about it.
Posted by swisslet at 20:40